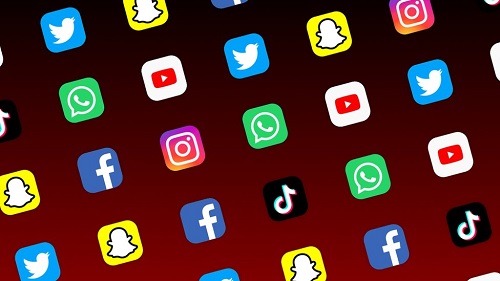 The “digital explosion,” the increasing rise of Internet users, and the striving to achieve the highest number of views and click-through rates by chasing after intriguing scoops and mass viewing and accordingly maximizing the profits and maintain the monopoly of scocial-media market. This greed for profits and the competition to hold the monopoly have emboldened websites to offer their ‘products’ that would achieve these goals without the slightest evaluation or research regarding the resultant positive impact of those products, ignoring thereby all the guidelines, functions and objectives of the message of mass media.

Social networking sites such as TikTok, YouTube, Kik, Snapchat, Instagram, and many other social media platforms have become intriguing virtual worlds that attract and trap most Internet users from all ages. These platforms have become the most comfortable and alluring spaces to which all people flocked to break the dullness of their daily lives and rest from the exhausting struggle to earn a living. This is how these websites were easily and effortlessly promoted, by leveraging the fast-paced modern lifestyle.

Frivolity and onslaught of ethics

Whoever visits these websites will clearly see the massive amounts of utter nonsense and the silly, superficial and trivial materials posted on them. It is a shocking fact that thousands or even millions of videos and various entertainment materials are posted on these platforms, and its numbers are vastly and threateningly increasing day by day, most of which target the new generation; the generation to whom digital media and technological modernity have become an integral part of daily life. Rather, these websites continue to innovate and outdo themselves each time to produce jaw-dropping ‘media or entertaining’ materials, in terms of their triviality and frivolity at times and their morally degraded nature at other times, in utter oblivion to the real-life issues and many other crises that are of concern to people all over the world.

These sites use scandals, sensationalize events, and exploit people’s tragedies and sufferings by publicizing their private affairs, defaming them. Publishing images and film footage that induce emotional temptation and posting videos that invade their privacy, sometimes amounting to putting them to ‘trial by media’. These privacy-invasive behaviors have become a means to generate good ‘stories’ for paparazzi and websites and are only perceived as means to achieve high ratings and huge revenues.

These websites also exploit the users’ desires to pursue what is new and unusual. As a result of the perceptible chasing after whatever is unfamiliar and usual, trivializing the social media content has become essential and key to success in the eyes of key players in the social media industry to ensure the suitable and adequate attention from their users.

One of the most grievous evils of following these trivial social media accounts is that most of the followers or viewers of the videos posted thereon, which exhibit utter superficiality, feel ‘full’ and saturated with the insignificant and trivial news. Consequently, they become unready to follow up on important fateful news and keep abreast of the vital events that are related to their lives and the conditions of their country. This means that they turn their followers into marginalized people living outside of their reality and distracted from the important issues of their lives.

In addition, there is an ongoing ideological struggle and a gross violation of our morals and social norms and traditions that go hand in hand with the immersive engagement with social networking sites, which secretly aim to tamper with the standards of our conservative societies and the traditional values of communities.

Mahathir Mohamad, former Malaysian Prime Minister, said in his book Islam and the Muslim Ummah: “The media has its own agenda in the present time, because it seeks to reshape the world, and it is not the world or its leaders’ ways of thinking that shape the media coverage. What the media sees or considers to be right for the world is what matters and what is taken into account now.”

As a result of this constant following of such media, most of the followers live a “dual reality” between two worlds, one real and the other virtual. Many of them imitate whatever they view in the virtual world, and this applies to the adults even more than to the young, without assigning care to the societal moral standards or legal restrictions, in pursuit of fame or as an escape from a painful frustrating reality.

Another unfortunate result is that the ‘profession’ of creating absurdity and triviality has become quite profitable, and this prompts some people to put on an occasional display of madness or idiocy, and others to feign greatness and silly humor. We also find some so-called ‘artists’ playing the same role, displaying narcissism and dull pride, assuming that money can earn them respect, attention, brilliance, and lasting fame ... all these efforts aim to get more followers and gain a fake fame that hides behind it ‘empty minds’ and unstable unbalanced intellects, yet they attract large audiences, especially in the Arab world, albeit that most of the viewers log in for the sake of mere humor and entertainment!

The trivialization of thought and the marginalization of knowledge, seriousness and earnest work are among the effects of this immersion in the virtual world. The problem is much bigger than mere media penetration or violation of professional ethical code; it is much greater than that. Scientists, thinkers, doctors and owners of ‘serious’ online platforms, whether on Twitter, Instagram, Snapchat, and the like, find very few followers who wish to benefit from their ideas, opinions, and knowledge, whereas tens of thousands, and possibly hundreds of thousands, of people follow the “triviality mongers” on social media, which is not a positive indicator at all.

Another dangerous consequence of unrestricted use of these easily accessible websites is that they have become a means of temptation and corruption, an open space for the display of bodies, and a hotbed for promoting immorality and depravity, as we see firsthand. We see brazen nudity and immoral practices that are being encouraged under the pretext of ‘personal freedom’, but they, in fact, strike at the very core of the moral ethics of Muslim communities and demolish all the principles and values ​​of our conservative societies.

First: we are generalizing, but we would like to emphasize that there are certain acknowledged social media platforms that provide great thought-provoking and useful content, and some users are keen on fostering seriousness, credibility, and social integrity, but they are few in number, have no real influence, and their voices are hardly heard in the midst of such tidal waves and loud noise.

Second: counteracting the negative impact of this kind of media is primarily done by promoting awareness and highlighting the destructive effects of the exposure to such nonsense. Such efforts would cost website owners a significant loss of viewership and consequently loss of hefty sums of the revenue they generate. They were only emboldened to cause this corruption because they found those who encouraged them to cause it.

The parents are urged to shield the future generations against this filth and should ‘vaccinate’ them against these germs and epidemics.

They should cultivate within their children the spirit of creativity, earnestness, morality and respect for the intellect and for humankind.

They should uproot from their hearts any sympathy for those who fight us, while speaking our own language and bearing names like ours.

Moreover, media laws should be activated in our societies to preserve our legacy that is being undermined and distorted from within more than it is from without.

Third: we would like to assert that we are not against entrainment, feeding one’s curiosity, and exploration, but we are objecting to the trivialization of media content to suit some shallow mentalities, and to lure adolescents to undertake unusual and often dangerous challenges ... or to be platforms for promoting alien decadent ideas that tamper with the thought of ideology and the morale of Muslim youth.