Origin of birds and mammals 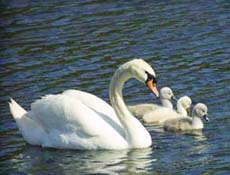 Evolutionists embark on flights of fancy of their own, while trying to justify how birds and mammals developed from amphibians

According to the theory of evolution, life originated and evolved in the sea and was then transported onto land by amphibians. This evolutionary scenario also suggests that amphibians evolved into reptiles, creatures living only on land. This scenario is implausible, due to the enormous structural differences between these two classes of animals. For instance, the amphibian egg is designed for developing on land. A “step by step” evolution of an amphibian is out of the question, because without a perfect and fully-designed egg, it is not possible for a species to survive. Moreover, as usual, there is no evidence of transitional forms that were supposed to link amphibians with reptiles. Evolutionist paleontologist and an authority on vertebrate paleontology, Robert L. Carroll has to accept that ‘the early reptiles were very different from amphibians and that their ancestors could not be found yet.'

Yet the hopelessly doomed scenarios of the evolutionists are far from over. There still remains the problem of making these creatures fly! Since evolutionists believe that birds must have somehow evolved from lower life-forms, they assert that they were transformed from reptiles. However, none of the unique mechanisms of birds, which have a completely different structure from land-dwelling animals, can be explained by gradual evolution. First of all, the wings -- which are the exceptional traits of birds -- pose a great impasse for evolutionists. One of the Turkish evolutionists, Engin Korur, confesses the impossibility of the evolution of wings:

"The common trait of the eyes and the wings is that they can only function if they are fully developed. In other words, a half-developed eye cannot see; a bird with half-formed wings cannot fly. How these organs came into being has remained one of the mysteries of nature that needs to be enlightened."

The question of how the perfect structure of wings came into being as a result of consecutive haphazard mutations remains completely unanswered. There is no way to explain how the front arms of a reptile could have changed into perfectly functioning wings as a result of a distortion in its genes (mutation).

Moreover, just having wings is not sufficient for a land organism to fly. Land-dwelling organisms are devoid of many other structural mechanisms that birds use for flying. For example, the bones of birds are much lighter than those of land-dwelling organisms. Their lungs function in a very different way. They have a completely different muscular and skeletal system and an extremely specialized circulatory system. These features are pre-requisites for flying, at par in their importance with wings. All these mechanisms had to exist simultaneously,  they could not have formed gradually by being “accumulated”. This is why the theory asserting that land organisms gradually evolved into aerial organisms is completely fallacious.

All of these bring another question to mind: even if we suppose this impossible story to be true, why are evolutionists unable to find any “half-winged” or “single-winged” fossils to back up their story?

Evolutionists pronounce the name of a single creature in response. This is the fossil of a bird called Archaeopteryx which is one of the most widely-known so-called transitional forms among the very few that evolutionists still defend. Considered the ancestor of modern birds by evolutionists, Archaeopteryx lived 150 million years ago. The theory holds that some of the small-scaled dinosaurs named Velociraptor or Dromeosaur evolved by acquiring wings and then starting to fly. Thus, Archaeopteryx is assumed to be a transitional form that diverted from its dinosaur ancestors and started to fly for the first time.

However, the latest studies of Archaeopteryx fossils indicate that this creature is absolutely not a transitional form, but a bird species bearing some characteristics distinct from today’s birds.

The thesis that Archaeopteryx was a “half-bird” that could not fly perfectly was popular among evolutionist circles until not long ago. The absence of a sternum (chest bone) in this creature, or at least the structural difference from flying birds, was held up as the most important evidence that this bird could not fly properly. (The chest bone is a bone found under the thorax on which the muscles required for flight are fastened. In our time, this chest bone is observed in all flying and non-flying birds, and even in bats – a flying mammal which belongs to a very different family).

"The recently discovered seventh specimen of the Archaeopteryx preserves a partial rectangular sternum, long suspected but never previously documented. This attests to its strong flight muscles."

This discovery invalidated the mainstay of the claims that Archaeopteryx was a half-bird that could not fly properly.

On the other hand, the structure of the bird’s feathers became one of the most important pieces of evidence verifying that Archaeopteryx was a flying bird in the real sense. The asymmetrical feather structure of Archaeopteryx is indistinguishable from modern birds, indicating that the animal could fly perfectly. As the famous paleontologist Carl O. Dunbar states: “because of its feathers Archaeopteryx is distinctly to be classed as a bird”.

Another fact that was revealed by the structure of Archaeopteryx’s feathers was the bird’s warm-blooded metabolism. As it is known, reptiles and dinosaurs are cold-blooded animals that are affected by environmental temperatures and are incapable of regulating their body heat independently. A very important function of the feathers in a bird is the maintenance of the animal’s body heat. The fact that Archaeopteryx had feathers showed that it was a real, warm-blooded bird that needed to maintain its body heat in contrast to the dinosaurs.