Islam is not merely idea 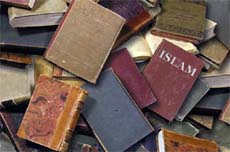 No Muslim can accept the categorization of Islam as merely an “idea”. Islam is based on the word of God, revealed syllable by syllable to Prophet Muhammad

(may Allah exalt his mention), 1400 years ago. Thus, it is not merely idea; rather it is an idea, ideology, the Truth and a complete way of life. As the Quran states (what means): "Whoever wishes for a way of life other that Islam, never will it be accepted from him and in the Hereafter he will be amongst the losers." [Quran 3: 85]

Allah mentions that this religion has been completed and perfected, and has no need for alteration or adjustment (what means): "This day I completed your religion for you and perfected My favor upon you and chosen for your way of life Islam." [Quran 3:85]

It is true that Islam does not draw a distinction between the "inner" and "outer" aspects of life, between belief and actions, religion and politics; in reality, such distinctions are fallacious. Man's beliefs are the foundations and prime motivators for actions, for what is held to be true on the inside must manifest itself outwardly.

Indeed, the very first task given to Prophet Muhammad

was to correct the false beliefs. It was not that the pagan Arabs did not believe in Allah, or God, the Creator. In fact, the Quran tells Prophet Muhammad

(what means): "If you ask them who sends down rain from the sky, and gives life therewith to the earth after its death? They would certainly say 'Allah!' Say: 'All praise and thanks be to Allah!' Nay! Most of them have no sense." [Quran 29:63]

The pagan Arabs used to worship Allah, pray to Him and sacrifice to Him in times of need and distress, as did the Jews and Christians, and they even claimed to love Him, but Allah rejected their actions  and referred to them as ‘senseless’, ‘astray’ and ‘disbelievers’. Hence, this is the reality concerning most of the men and Jinn; they claim to believe in Allah and worship Allah, but what they believe about Him is incorrect and the way they worship Him is incorrect. The Quran says (what means): "Most of them do not believe in Allah except while joining partners with Him." [Quran 12:106]

There is one common cause for this rejection, that is, thinking and speaking about Allah without knowledge, and thus ascribing to Him that which should not be ascribed to Him, such as sons, or daughters, or human qualities and weaknesses; claiming that some of the creation possess His powers and abilities, or by claiming that He, the Majestic, is pleased by some action that in fact angers Him, or that He is angered by some action that in fact pleases Him.

Thus,  the idol worshippers call upon that which can neither benefit nor harm them; the Christians call upon Jesus, may Allah exalt his mention; the Jews believe their racial origins guarantee His good pleasure; and there are those who believe that power and wealth are means of success -- all have put their faith and trust in something in vain. This in itself is a great evil, for they have only wasted their time and effort, yet this is least of the evil consequences.

As for that which is most severe  -- those who have fallen into associating partners with Allah -- have earned His anger and wrath, and upon them shall fall humiliation in this life and a most terrible fate in the next. The Quran says (what means): "Surely Allah will not forgive al-Shirk (the association of partners with Him), but He forgives sins less than that of whomever He wishes." [Quran 4:48]

So Shirk or ascribing partners to Allah (whatever form it may take) is an unforgivable sin, because it is the source of all evil, the greatest injustice, the worst oppression and wrongdoing. For, if one is unafraid of speaking about Allah without knowledge (and this knowledge is attained only through Him, for He is the Best Knower of Himself and His will) and that which pleases and displeases Him, then what will one be afraid of speaking about ignorantly?

Anyone witnessing the destructive forces of nature and the untold misfortunes and miseries over which Allah alone has ultimate power and control, both in this life and the next, would realize that Allah is the most worthy of being feared. Similarly, anyone contemplating the miraculous order, precision and symbiosis within the earth and universe, must realize the unparalleled knowledge and wisdom of its Creator.

If one is heedless of transgressing the laws of Allah, and attaches little or no importance to them, or worse considers them bad, evil, and outdated, then what of the laws conceived in the limited minds of men? If one is ungrateful to his Lord, the Provider of all, then of what little consequence to such a one is ingratitude to the creation? If one denies the rights and dues of Allah, which are the most worthy of being fulfilled, then what rights and dues will such a person be fearful of denying?

Imagine the case of a fictional worker in a company owned and run by you, who believes you are the lavatory cleaner and the lavatory cleaner is the director! Would there not be evil results? Would you tolerate such a person? If so, for how long? Now envisage this fool teaching this to others and insisting on it, so that the majority of the company came to believe it, ignoring your orders and prohibitions and inventing their own rules, making the lavatory cleaner who is deaf and dumb their guide!

The true causes of the evils that beset mankind are disbelief, sinfulness and ingratitude to Allah, as the Quran says (what means): "And whatever of misfortune befalls you, it is because of what your hands have earned. And He pardons much." [Quran 42:30]

said: "There is none who has a greater sense of Ghayrah (a feeling of great fury and anger when one's honor and prestige is injured or challenged) than Allah, and so He has forbidden shameful deeds and sins. And there is none who likes to be praised more than Allah does." [Al-Bukhari]

Allah is more infuriated by the disobedience of His slave than a man of honor who finds his wife fornicating with another man. So how is His fury with those who insult Him by ascribing rivals and partners with Him, while He is Glorious above such things! In addition, the evil consequences are not limited to this life, as the Quran says (what means): "Verily, those who disbelieved and die while they are disbelievers, the whole earth full of gold will not be accepted from anyone of them even if they offered it as a ransom. For them is a painful torment and they will have no helpers."  [Quran 3:91]

explained: "On the Day of Judgment, the disbeliever will be asked: 'Suppose you had as much gold as to fill the earth, would you offer it to ransom yourself from the hell-fire?' He will reply: 'Yes!' Then it will be said to him: 'You were asked for something easier than that, that you should join none in worship with Allah, and submit yourself to Him, but you refused.'"  [Al-Bukhari]

The message of all the Prophets, may Allah exalt their mention,  is one and the same (which means): "Verily, We have sent to every nation a Messenger, saying: 'Worship Allah and avoid false objects of worship.'"  [Quran 16:36]

Indeed this is the very purpose for which Allah created mankind, as He Says (what means): "I did not create the Jinn and mankind except for My worship." [Quran 51:56]

Hence,  Shirk (ascribing partners to Allah) is in contradiction to the reason for which Allah has created us, and the purpose for which we exist -- which is to single out Allah for worship, avoiding all false deities and to worship Him completely, with sacrifice, supplication, submission, subjugation, obedience, compliance; and with love, fear, hope, trust and reliance upon Him, seeking only His pleasure and not the admiration of His creatures; and to do all of that according to that which was revealed to His last and final Messenger Muhammad

and not according to whims, desires and mere conjecture.

Furthermore, of immediate relevance to the discussion, are those qualities, unique to Allah, that single Him out, such as "Al-Haakim," (The Judge); "Al-Hakeem," (The Wise) and "Al-'Aleem," (The All Knowing). Not only is Allah the Creator, Controller and Sustainer, He is also the Sole Possessor of the wisdom and knowledge, to legislate for mankind and to determine what is good and what is evil, what is right and what is wrong, what is lawful and what is prohibited; thus extending to the laws we should judge by and the social, economic and political system we should utilize. The Quran says (what means): "And no partner in legislating has He - He is Alone." [Quran 18:60]

Allah admonished the Jews and Christians and called them disbelievers, for (which means): "…taking their priests and rabbis as lords besides Allah." [Quran 9:31]

If Allah blamed the Jews and Christians for accepting changes and alterations made by the men learned in the Scripture and Divine legislation, for making the forbidden allowed and vice versa, then how about those who accept such actions from every Tom, Dick and Harry, who have no scripture, no wisdom and only pure speculation, whims and desires?

Islam makes no distinction between outward and inner, private and public life. People should not adopt ways of the worst error: disobedience to and rebellion against Allah and not commit the unforgivable sin of ascribing partners to Him.