Examples of equality in Islam 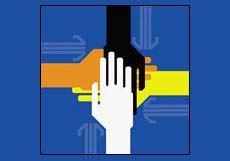 who addressed Abu Tharr, may Allah be pleased with him, saying: "Did you call him a name reviling his mother? It appears that you still retain vestiges of Jaahiliyyah (the period of ignorance before Islam.)"

Abu Tharr, may Allah be pleased with him, failed to understand the word Jaahiliyyah and took it to signify some sort of sexual immorality, and meekly questioned in surprise, "At this ripe age, O Prophet of Allah?" The Prophet

When a woman of the Bani Makhzoom tribe called Faatimah was found guilty of theft, she was brought to the Prophet

to be judged according to Sharee'ah Law. The Quraysh tribe tried to intercede not to punish the woman and after deliberation, sent Usaamah bin Zayd, may Allah be pleased with him, for intercession since he was very much a favourite of the Prophet

. When he talked to the Prophet

became very angry and said to Usaamah, may Allah be pleased with him: "Do you (attempt to) intercede in the matters of the limits prescribed by God?" Then he gathered the people and said to them: "The people before you who met their doom, discriminated between the elite and the common-folk in the dispensation of justice for crimes like theft. The high-placed were spared while the weaker elements of society were readily punished. By Allah! Had Faatimah the daughter of Muhammad committed this theft, then I would have amputated her hand for it also!"

Qays bin Mutatiyah, a hypocrite, came to a gathering where Salmaan al-Faarisi (the Persian), Suhayb Ar-Roomi (the Roman), and Bilaal Al-Habashi (the Abyssinian) were present. He remarked tauntingly: "'Aws and Khazraj have rendered some service to this person (the Prophet

) but I fail to understand what these people (Bilaal, Suhayb and Salmaan) have done (to deserve this honour)." Mu'aath bin Jabal was in that gathering, and he caught hold of him by his neck, dragged him to the Prophet

and told him what the hypocrite had uttered. The Prophet

became angry and went to the mosque and gave a sermon, stating in it: "O people! Always remember that your Lord and Cherisher is one and your supreme ancestor is one, and your faith is also one and the same."

'Adiyy bin Haatim, may Allah be pleased with him, went to Madeenah before embracing Islam and found the Companions sitting around the Prophet

. 'Adiyy was inspired with awe when he witnessed their reverence for him. Meanwhile, a humble woman came to the Prophet

and asked to see him in private. The Prophet

got up and at some distance from the gathering talked to her, and returned when he finished. 'Adiyy was very much touched by this inconceivable concept of philanthropy and, eventually, embraced Islam.

conquered Makkah, those who had driven him out and fought with him were brought before him vanquished. Even then, he called them to the same thing, to Islam. Standing at the gate of the Ka'bah he said: "O people of Quraysh! Allah has, this day, put an end to your pride of the Jaahiliyyah (ignorance) and also the pride of your ancestry. Keep in mind! All men are from Aadam, and Aadam was fashioned out of clay." On this occasion he recited the verse which means: "O Mankind! Indeed We have created you from male and female and made you peoples and tribes that you may know one another. Indeed, the most noble of you in the sight of Allah is the most righteous of you..." [Quran: 49:13]

Sixth Example
'Umar, may Allah be pleased with him, was a glorious caliph. He was sympathetic to the weak, firm in his stand by the truth. He used to go without food to feed others, and kept himself deprived to give to others. He used to go from door to door asking people about their conditions of living, etc.

Then he went back to his own position. Once again he heard the baby crying, and went over to the mother yet again and gave her the same advice. Later, during the last part of the night the child cried once more. 'Umar, may Allah be pleased with him, came to the mother and said: "Woe to you! You appear not to be a good mother. How is it that your child can not sleep peacefully during the night?"

The woman, little suspecting that she was speaking to the Ameer of the believers, said in reply: "May Allah bless you, you have pestered me several times during the night. I want to wean it forcefully (before time,) but the child is intractable." 'Umar, may Allah be pleased with him, asked her: "Why wean it forcefully?" She said in reply: "Because 'Umar grants allowance only for such children that have been weaned."

'Umar, may Allah be pleased with her, asked her: "How old is your child?" She told him it was only a few months old. 'Umar, may Allah be pleased with him, asked the woman not to be hasty in weaning her child. Then he led the dawn prayer in such a state that his weeping made his recital of the Quran inaudible and unintelligible. At the end of the prayer he said: "'Umar is ruined! He has killed the children of the believers!" Thereupon, he ordered the crier to proclaim in the town of that the mothers should not wean their children only for the sake of the allowance for their children. From now on, every child, suckling or weaned, was to receive a stipend.

One of the unique incidents relating to sympathy and equality in the history of mankind is that 'Umar, may Allah be pleased with him, came by one night. It was usual for him to go out during the nights to see with his own eyes the conditions under which the people were living. One night, he heard somebody crying in a nearby tent, at whose door was standing a man. 'Umar, may Allah be pleased with him, greeted him and asked him who he was.

He said in reply that he was a Bedouin who had come to Madeenah to ask the Ameer of the believers for help. Then 'Umar, may Allah be pleased with him, asked him about the crying and wailing inside the tent. The Bedouin tried to evade this question, saying that since it did not concern him he should not interest himself in it and go his way.

He took all those things from her and started, Umm-Kulthoom following him. When they came to the Bedouin's tent, 'Umar, may Allah be pleased with him, sent his wife inside. He himself sat with the husband and, lighting a fire, started cooking food with the provisions he had brought with him. The Bedouin was still unaware that he was sitting beside a great man of the world.

Then the child was delivered and Umm-Kulthoom, may Allah be pleased with her, called him from inside the tent, addressing him as Ameer Al-Mu'mineen, and asked him to congratulate his friend on the birth of his child. The Bedouin on hearing her words became conscious of the fact that he had been with the head of the Islamic state all this time and had been rude to him, and was awe-struck and began receding from 'Umar, may Allah be pleased with him.

But 'Umar, may Allah be pleased with him, reassured him and asked him to keep sitting where he was, unceremoniously. He asked Umm-Kulthoom to offer the mother the food that he had cooked while he offered some to her husband saying, "Partake of it, you have been kept up the whole night and have been inconvenienced."

Similar were the lives of 'Umar bin 'Abdul Azeez, Salahuddeen Ayyoobi, and many other big personages, legists and leaders who also present countless immortal examples. They are in themselves brilliant evidence in favour of this glorious civilisation from every aspect.