The light of the truth 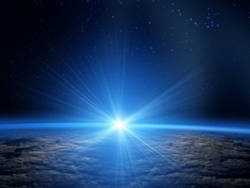 Man's existence in this world and the creation of this entire universe are not mere accidents or products of a fortuitous nature. This universe, every single atom of it, manifests and leads us to the realization of a Loving, Merciful and All-powerful Creator. Without a Creator, nothing can exist. Every single human being is aware that their existence is dependent upon a Creator. He knows for sure that he cannot create himself. Therefore, it is his duty to know his Master, the Creator.

Man is a unique creature. Allah, the Most Exalted, established man as His representative or deputy, to govern over all other creatures in this world. He is endowed with the faculty of reason, which sets him apart from all other animals. Together with this faculty to discriminate and discern, man has been given the freedom to choose for himself a way of life worthy of his position as Allah's representative, or to fall lower than the lowest of all animals or creations. Almighty Allah Says in the Noble Quran (what means):

"And [by] the soul and He who proportioned it. And inspired it [with discernment of] its wickedness and its righteousness. He has succeeded who purifies it. And he has failed who instills it [with corruption]." [Quran 91: 7-10]

Man is born pure and sinless and has been given the choice to do righteous deeds or indulge in sins. Prophet Muhammad

(may Allah exalt his mention) said in an authentic Hadeeth (narration):  "No babe is born but upon Fitrah (innate nature, which is Islam). It is his parents who make him a Jew or a Christian or a Magian." [Muslim]

The Creator, out of His abundant Love and Mercy for mankind has not left us in darkness to discover the right path by trial and error alone. Coupled with our intellectual capability to reason, our Creator bestowed upon us Divine Guidance that outlines the Criterion for Truth, knowledge, as well as the reality of our existence in this world and the Hereafter.

From the beginning of mankind, our Creator sent Prophets, may Allah exalt their mention, to convey His Revelation and to invite human beings to the Path of true peace and obedience to the one true God. This is Islam. This message has been conveyed to man in successive generations through the different prophets, may Allah exalt their mention, who invited mankind to the same Path. However, all the earlier messages or revelations from Allah Almighty were distorted by people of later generations.

As a result, the pure Revelation from our Creator was corrupted with myths, superstitions, idol worship and irrational philosophical ideologies. The religion of Allah, the Exalted, in a sense was lost in a plethora of religions. Human history is a testament of man's drift between light and darkness, but Allah, out of His Abundant Love for mankind, has not forsaken us.

When mankind was in the depths of the Dark Ages, our Creator sent His final Messenger, Prophet Mohammed

to redeem humanity with the final Revelation, which represents the ultimate and permanent source of guidance for the whole world.

The following criteria can best serve as a gauge to find out the authenticity of the last Revelation (the Quran), the Word of Allah:

Since our Creator bestowed reason and intellect upon us, it is our duty to use it to distinguish the truth from falsehood. True, undistorted Revelation from Almighty Allah must be rational and can be reasoned out by all unbiased minds.

Since our Creator is All-Perfect, His Revelation must also be perfect and accurate, free from mistakes, omissions, interpolations and multiplicity of versions. It should be free from contradictions in its narration.

3. No myths or superstitions

True Revelation is free from myths or superstitions that degrade the dignity of our Creator or man himself.

Since our Creator is the Creator of all knowledge, True Revelation is scientific and can withstand the challenge of Science at all times.

Our Creator is the Knower of the past, present and future. Thus, His prophecies in His Revelation will be fulfilled as prophesied.

True Revelation is infallible and cannot be imitated by man. Allah's true Revelation is a Living Miracle, an open book challenging all mankind to see and prove for themselves its authenticity or veracity. Almighty Allah Says in the Noble Quran (what means):

"Then do they not reflect upon the Quran? If it had been from [any] other than Allah, they would have found within it much contradiction." [Quran 4:82]