Restrictions for a Person in the State of Ihraam - I 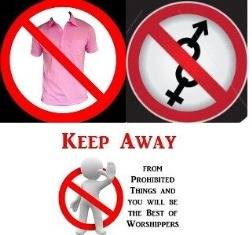 A person in the state of Ihraam is a person who made intention and entered into one of the two sacred rituals, Hajj or 'Umrah, accompanied by the removal of normal clothing and putting on special clothing and then reciting the Talbiyyah.

There are certain restrictions that apply to the one who assumes this state.

The following are the acts that are not permitted:

Sexual intercourse and all matters leading to it:

Sexual intercourse and all matters leading to it such as kissing, touching and similar things nullify the Hajj or 'Umrah completely and the one who does so must sacrifice a camel. If he cannot find one, he must fast ten days, and along with that, he must make up (for the Hajj) another year. However, it is still mandatory to continue with it (i.e. the remaining acts of Hajj or 'Umrah) until it is complete.

issued a verdict concerning a man who had sexual intercourse with his wife in the state of Ihraam. In this verdict, they said: "They both continue to perform (the remaining Hajj rites) for their own face (i.e. to save them embarrassment) until they complete their Hajj. Then they must perform Hajj (again) in the future and they must sacrifice an animal"

As for the things that lead to sexual intercourse, the one who does them must sacrifice an animal, meaning to slaughter a sheep.

Disputing, arguing or fighting with people:

Allah Says (what means): {…Whosoever intends to perform Hajj (therein by assuming Ihraam), then he should not have sexual relations (with his wife), nor commit sin, nor dispute unjustly during the Hajj…} [Quran; 2:197]

On the authority of Abu Hurayrah

said: "He who performs Hajj, committing no obscenity, nor wickedness, nor wrangling, will return home free of sins as the day his mother bore him." [Al-Bukhari and Muslim]

In this case, as well as the rest of the sins, like backbiting, gossiping and everything that enters under the wording Al-Fusooq (wickedness or sin), the person must repent and seek Allah’s forgiveness. This is because there’s nothing reported in Islam that has made any expiation for them other than repentance and seeking Allah’s forgiveness.

Such as a shirt, hooded robes, cloak, underpants or wrapping anything around the head, a cap or a fez, etc.

The one who does it must make a compensation, which is fasting three days, or feeding six poor people with a Mudd (750 grams) of fine wheat each, or slaughtering a sheep. This is due to Allah’s Saying (what means): {…So whoever among you is ill or he has an ailment on his head (i.e. his hair), then he must make a cimoensation of fasting or giving charity or sacrificing (an animal)….} [Quran; 2:196]

said: "A person in the state of Ihraam is not allowed to wear a form-fitting shirt, a turban, a hooded robe, underpants, […] shoes or sewn slippers, unless one is unable to find regular unsewn slippers, then one may wear his shoes provided one cuts them down to the ankles."  [Al-Bukhari and Muslim] These restrictions apply to men only.

As for a woman, she may wear all of the above. But she is forbidden to use perfumed clothes, a veil that covers the face (tied around it), or gloves.

forbade women pilgrims from wearing gloves, Niqaab (veils tied on the face) […]. Besides these, they may wear anything else, any color, silk clothes, ornaments, trousers, or a shirt or shoes." [Abu Daawood, Al-Bayhaqi and Al-Haakim]

said: "A pilgrim woman must neither cover her face nor wear gloves." [Al-Bukhari and Ahmad] This proves that a woman in the state of Ihraam should not cover her face and hands. The scholars, however, say that there is no harm if she covers her face with something other than a Niqaab. She may also use an umbrella or similar item as a screen between men and herself. But if she is afraid of tempting others she must cover her face by drawing a veil down from her head.

said: "Men on camels used to pass by us while we were with the Prophet

and in the state of Ihraam. We would cover our faces by drawing veils down from our heads when they passed by us, and then uncover them again." [Abu Daawood and Ibn Maajah]

Contracting a marriage, or acting on behalf of others, or acting as a guardian for someone:

Such a marriage contract is invalid, null and void, and is not binding. The Prophet

Restrictions for a person in the state of Ihraam - II