History of the Sunnah -I: At the time of the Prophet 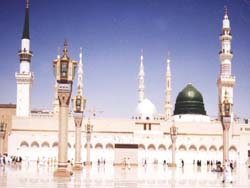 Muslims were, early on, aware of the significance of the Sunnah and its authority. They, one generation after the other, were keen to preserve the Sunnah because they saw that as a part of the preserving of the last revelations man is ever to receive. Their efforts were unabated, and the remarkable job they did is unparalleled in the experience of any other religion or civilization.

At the time of the Prophet

clearly taught the Companions, may Allah be pleased with them, the importance of his Sunnah, its place in Islam and their role in saving it, teaching and conveying it to others around them and to those who would come after them. In so doing, he

followed an effective methodology, which will be briefly outlined below:

emphasized the importance of seeking knowledge and teaching it to others. He

said: "Seeking knowledge is obligatory upon every Muslim (male and female)." [Ibn Maajah] Also, he

said: "Whosoever pursues a path to seek knowledge therein, Allah will thereby make easy for him a path to . No people gather together in one of the houses of Allah (mosques), reciting the Book of Allah and studying it among themselves, without tranquility descending upon them, mercy enveloping them and angles surrounding them, and Allah making mention of them to those (angels) who are with Him." [Muslim]

always had a center for teaching. Most of the time, it was the mosque.

was soft in his dealings and always facilitated things and made them easy for others. He

was merciful and humble and made himself readily available.

never pushed people into anything. Instead, he

gradually taught them and led them to change. He

always motivated them to follow his example and be their best.

would not continuously teach or work with them, but he would give them enough breaks to avoid overstressing or boring them.

spoke plainly and clearly and he

talked to people at their level of understanding and intellectual ability. Whenever appropriate, he

spoke to people in their own dialect for the Arabs had different dialects.

used the method of repetition. He

would give more than what is expected as an answer and use the occasion to further clarify things for all, and teach about other things.

had to choose between two ways, he

chose the easier way, which had facility and mercy if there was nothing forbidden in that, and he

kept away from the difficult and harsh ways.

attached special attention to teaching the women and provided them special times for questions. He

encouraged them to ask and learn.

used to do his best in everything, and he

perfected whatever he did, thus setting an example for others.

The era of the Companions and their Followers

Their role in the preservation of Islam was one of utmost importance to its continuation, but they were highly prepared for it by the best teacher and trainer, the Prophet

. Thus the studying of this era, especially with respect to the history and authority of the Sunnah, is necessary to all Students of Knowledge.

Methodology of the Companions in Preserving the Sunnah

Before discussing the Companions' ways of learning, practicing, preserving and conveying of the Sunnah, it is worthwhile to shed some light on the main points one needs to understand about the Companions, may Allah be pleased with them, and their methodology:

1.      The Companions, may Allah be pleased with them, were fully aware of the responsibility they shoulder after the death of the Prophet

3.      The Companions, may Allah be pleased with them, have developed a methodology for scrutinizing Hadeeths and narrators, and by doing that have established the rules of ascertaining narrations for those who came after them.

4.      The ability of different Companions, may Allah be pleased with them, to understand the Sunnah, memorize it and convey it varied from one Companion to another.

5.      The Companions, may Allah be pleased with them, left Makkah and Madeenah to many places around the Muslim world, at the time, for the purpose of delivering the message and teaching Islam to those who accepted it thus spreading the Sunnah throughout the land.

It is interesting to note that about 750 Companions, may Allah be pleased with them, narrated Hadeeths, seven of whom narrated a high number of Hadeeths, and about twenty narrated an average number, the rest narrated a small number.

The seven who narrated a large number of Hadeeths are: Abu Hurayrah who narrated 5374 Hadeeths, 'Abdullaah Ibn ‘Umar narrated 2630, Anas Ibn Maalik narrated 2286, 'Aa'ishah narrated 2210 Hadeeths, 'Abdullaah Ibn 'Abbaas narrated 1660, Jaabir Ibn 'Abdullaah narrated 1540, and Abu Sa'eed AI-Khudri narrated 1100 Hadeeths, may Allah be pleased with them. They understood their role and were aware of the significance of their ability in narrating the Hadeeths and did their best to deliver them diligently and accurately. Muslims of all times are indebted to them, may Allah be pleased with them.

History of the Sunnah -II: The era of the Companions and their followers