Islam and Alcoholism - I 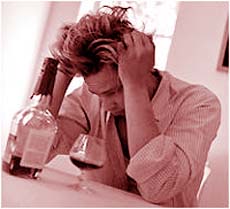 According to Islam, if too much of a drink causes drunkenness, then any small quantity of this drink is prohibited, because all alcoholics start with small quantities, then they become the slaves of alcohol.

However there are some illusions that many people falsely believe about alcohol. In this article we will try to discuss and refute them to show the wisdom of prohibiting alcohol in Islam. We will also prove that Islam does not prohibit a thing unless it is harmful and dangerous.

2) Alcohol and False Warmth: It was also believed that alcoholic drinks cause warmth in the human body. But facts proved that it is only a false warmth caused by the widening of outer blood vessels. But if the drunkard is exposed to cold weather, he loses all his warmth and energy and may die of cold thinking he is enjoying warmth.

3) Alcohol and the sexual drive: Alcoholic drinks increase the sexual desire and thus may lead the drunkard to commit strange crimes under the influence of alcohol because his brain cannot function normally and in this case social values are trespassed. However, continuous drinking of alcoholic drinks ends up with sexual impotency. This shows us the wisdom of prohibiting alcohol in Islam.

Alcoholic drinks, which are prohibited by Islam, have a destructive effect on the nervous system through the direct toxic effect. Besides, alcohol may lead to alcoholism with its psychological and mental troubles such as convulsions and hallucination. Further, alcohol leads to malnutrition caused by inflammations in the digestive system, repeated vomiting, loss of appetite, and bad absorption in the digestive system. To add, some alcohols may cause complete blindness and heat failure owing to their severe toxicity.

An alcoholic becomes careless, selfish, easily provoked, and suspicious. He may suffer paranoia. He becomes sexually impotent. He is hated by his wife and children. He suffers from melancholy. He may end up committing suicide. An alcoholic may suffer from hallucinations: he may think he sees unreal ghosts or hear unreal voices or smell unreal scents.

An alcoholic suffers continual nightmares, where he sees and hears terrible things. All his life becomes a series of delusions and hallucinations. He may faint and lose consciousness any time.

The body of an alcoholic soon loses resistance to microbes and thus becomes an easy prey to any microbe. He has troubles in the kidneys, albumin in the urine, fatal blood acidity, which may end tragically with heart failure.

An alcoholic does not usually care for buying food. If he buys food, he has no appetite to eat it. If he eats it, he vomits what he has eaten. If he does not vomit, his digestive system cannot function well or absorb well. Thus an alcoholic soon goes into malnutrition and lack of vitamins; especially vitamin B. further, this Vitamin B is consumed by alcohol in the process of oxidization.

A drunkard may fall down under the influence of wine. This fall may cause a brain shock, a brain pressure, and a breakage in the backbone, bone breakage, or bleedings.