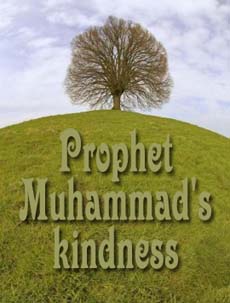 was especially fond of children and used to get into the spirit of childish games in their company. He

would have fun with the children who had come back from  and tried to speak in Abyssinian with them. It was his practice to give lifts on his camel to children when he returned from journeys. [Al-Bukhari]

would pick up children in his arms, play with them, and kiss them. A companion, recalling his childhood, said: "In my childhood I used to fell dates by throwing stones at palm trees. Somebody took me to the Prophet

who advised me to pick up the dates lying on the ground but not to fell them with stones. He

then patted me and blessed me." [Abu Dawood]

enjoined upon Muslims to treat the poor kindly and to help them with alms, zakat, and in other ways. He

said: "He is not a perfect Muslim who eats his fill and lets his neighbor go hungry."

asked: "Do you love your Creator? Then love your fellow beings first."

Monopoly is unlawful in Islam and he

preached that: "It is difficult for a man laden with riches to climb the steep path that leads to bliss."

did not prohibit or discourage the acquisition of wealth but insisted that it be lawfully acquired by honest means and that a portion of it would go to the poor. He

advised his followers: "To give the laborer his wages before his perspiration dried up."

did not encourage beggary either and stated that: "Allah is gracious to him who earns his living by his own labor, and that if a man begs to increase his property, Allah will diminish it and whoever has food for the day, it is prohibited for him to beg."

To his wife he

said: "O 'Aa'ishah, love the poor and let them come to you and Allah will draw you near to Himself." [Al-Bukhari]

One or two instances of the Prophet's

concern for the poor may be given here. A man from Madeenah, Ibad Ibn Sharjil, was once starving. He entered an orchard and picked some fruit. The owner of the orchard gave him a sound beating and stripped off his clothes. The poor man appealed to the Prophet

His clothes were restored and, in addition, some grain was given to him. [Abu Dawood]

was being harassed by his creditor as he could not clear his debt owing to the failure of his date crop. The Prophet

some more time but the creditor was not prepared to oblige. The Prophet

then went to the oasis and having seen for himself that the crop was really poor, he again approached the creditor with no better result. He

then rested for some time and approached the creditor for a third time but the latter was adamant. The Prophet

went again to the orchard and asked Jabir

to pluck the dates. As Allah would have it, the collection not only sufficed to clear the dues but left something to spare. [Al-Bukhari]

His love for the poor was so deep that he

used to pray: "O Allah, keep me poor in my life and at my death and raise me at resurrection among those who are poor." [An-Nasa'ee]

not only preached to the people to show kindness to each other but also to all living souls. He

forbade the practice of cutting tails and manes of horses, of branding animals at any soft spot, and of keeping horses saddled unnecessarily. [Muslim]

If he saw any animal over-loaded or ill-fed he

would pull up the owner and say: "Fear Allah in your treatment of animals." [Abu Dawood]

A companion came to him

with the young ones of a bird in his sheet and said that the mother bird had hovered over them all along. He was directed by the Prophet

to replace her offspring in the same bush. [Abu Dawood]

During a journey, somebody picked up some birds eggs. The bird's painful note and fluttering attracted the attention of the Prophet

who asked the man to replace the eggs. [Al-Bukhari]

As his army marched towards Makkah to conquer it, they passed a female dog with puppies. The Prophet

not only gave orders that they should not be disturbed, but posted a man to see that this was done.

stated: "Verily, there is heavenly reward for every act of kindness done to a living animal."