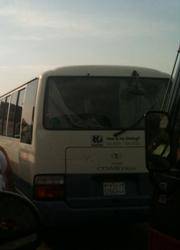 Each year, millions of people around the world travel by land, sea and air to make the obligatory pilgrimage to Makkah. We know friends and family that are going to Hajj and we make sure to wish them well at the Mosque or even see them off at the airport. Sometimes we make special house calls to visit a friend at home before he leaves; we ask that he forgive our mistakes and we absolve him of any errors. We wish our friends health and a successful Hajj, offering our own prayers so that their prayers will be answered. We also provide pilgrims with our own personal requests. "Please make Du’aa' (supplication) for my son to find a good wife." "Don't forget to make Du’aa' for my daughter to pass her medical license exam." The requests are so many. But, when that final moment comes, there is a distinction between those who are going and those who are staying behind.

The difference is that those who are going have overcome their obstacles and those that must postpone it yet another year are still jumping their hurdles.
Not enough money
The number one reason that Muslims cannot go to Hajj is because they cannot afford it.
Monetarily, a Hajj trip can be equivalent to any exotic vacation. Many pilgrims book a trip through a tour company specializing in Hajj trips. The packages usually include airline tickets, hotel accommodations, meals, and all bus transport in and around Makkah. Add to this the number of family members that are traveling and you have multiplied the price significantly. Some would-be pilgrims prefer that the entire family go together or not at all. For many, childcare is not an option for a two-week trip; therefore, the entire family must go together or wait until that is possible. Also, many young adults have elderly parents that would like to make the Hajj and can't go alone. Thus, the more people in a family, the more expensive that Hajj trip becomes.
Also, even though most don't like to admit it, there is much shopping that goes on during a Hajj trip. Men and women alike make special purchases during this `once in a lifetime' experience. Much as they would on any other vacation, people seek souvenirs for all the friends and family members that have been left behind. Before you know it, you have got a suitcase full of miniature prayer rugs for the kids, plus little Ka'bah replicas, loads of books, and pounds of Saudi dates for everyone back home. Very easily, a Hajj trip could cost a family of four more than 10,000 dollars.
Not the right time
Those who cannot afford to go to Hajj might believe that they are the only ones with a reason to postpone the Hajj, but interestingly even those who have the financial means to travel don't have the time. For many Western Muslims in the work place, the seemingly necessary two weeks of vacation time is not available. To be able to take off two weeks, one would have to assume no days off before or after the trip for illness and it would also require that no other days were taken off for the remainder of the year. This is difficult for many families since parents are usually taking days off to tend to sick children or to fight off their own colds and flues. Furthermore, if the family is to go as a whole, many parents cringe at the thought of pulling the kids out of school for two weeks, afraid of the work that the child will miss and more afraid that the child will fall behind.
A young family with very young children might willingly forego Hajj every year because the kids are too young to handle the Hajj or appreciate it or earn full reward for it. Some families opt to go only when all family members are willing and able—when everyone is physically capable and responsible for the Hajj and fulfilling all the actions and rituals that it requires.
On the other hand, there are other families that wait, not for the kids to be old enough to join in on the Hajj trip, but to be old enough to remain behind with childcare. Many young families also have extended family members in the household, including grandparents. When grandparents are living with a young family, the young father and mother must tend to not only their children but their parents, as well. In this case, the situation of both the kids and the elderly must be considered. If the young family is financially capable of going to Hajj and is even ready to take the required time off from work and school, the issue of who will care for the elderly grandparents or very young children can become a hindrance to Hajj. In this situation, many young families choose to postpone Hajj until a more opportune time.
Interestingly, in more and more cases, we see that one spouse has already completed the Hajj prior to marriage. In this situation, if the husband has already fulfilled his obligation, for example, then he is less inclined to take his wife for Hajj (perhaps due to financial reasons). In this case, the wife is delaying her Hajj because she needs her Mahram (non-marriageable relative) to escort her. Or, in the case of the wife who has already performed her Hajj, her husband might be reluctant to go without her and leave her behind.
In both situations, the spouse that hasn't completed the Hajj might consider waiting until the children are born, raised, and ready for Hajj so that the entire family can go once and make it valid for everyone.
And, in some instances, a young couple that has neither the demands of children nor elderly parents will still choose to postpone the Hajj, as well. Their reasoning is strictly emotional. They feel that they are still young and have the rest of their lives to go to Hajj. Erroneously, some still believe that Hajj is an old person's duty and yet it is a common feeling held by many young Muslim Americans. How many young newlyweds do you know that choose to go for Hajj on their honeymoon instead of Hawaii?

Why we don’t go to Hajj -II