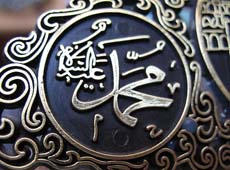 Do you truly love the Messenger of Allah

? A fundamental of our religion, and a tenet of our faith, is to love him.

Allah Says what means: “Say [O Muhammad]: ‘If your fathers, your sons, your brothers, your wives, your relatives, wealth which you have obtained, commerce wherein you fear decline, and dwellings with which you are pleased are more beloved to you than Allah and His Messenger and Jihaad  in His cause, then wait until Allah executes His command. And Allah does not guide the defiantly disobedient people.” [Quran 9: 24]

said: “This verse is enough of an evidence to prove the obligation of loving the Prophet

because Allah dispraised in it those whose wealth, family or children are dearer to them than the love of Allah and His Messenger

describing them as defiantly disobedient at its conclusion.”

Love of the Prophet

branches from Allah’s love of him; our love of the Prophet

is due to the fact that Allah loves him, and because Allah sent him to us as His Messenger, as well as the fact that Allah instructs us to make him dearer to our hearts than our own souls. He Almighty Says what means: “The Prophet is more worthy of the believers than themselves…” [Quran 33: 6]

This means that the believer should love the alayhi wa sallam more than he loves his own self.

This love entails full obedience, submission and acceptance; it also entails favouring the Prophet alayhi wa sallam over oneself, one’s family and one’s wealth, and to surrender to the alayhi wa sallam the controlling direction that one has over himself.

The influence that the alayhi wa sallam should have over us is greater than that which a master has over his slave, or a father has over his child. We should have no control over ourselves except in acting in accordance with the way he

It is for every Muslim to prove his love for him, which can be determined according to the following narration of the alayhi wa sallam: “There are three qualities; whoever has them will taste the sweetness of faith: To love Allah and His Messenger (

) more than anyone else…" [Al-Bukhari & Muslim]

One will never taste the sweetness of faith except after achieving this, as he

said in another narration: “I swear by the One in whose Hand my soul is! None of you will truly believe until I become dearer to him than his child, his father and all of mankind." [Al-Bukhari & Muslim]

This love is not simply an emotion that is confined to the heart, but rather it has implications and effects. This love makes the slave achieve a rank that he would not otherwise achieve by means of his bodily deeds, as in the narration of Ibn Mas`ood, may Allah be pleased with him, who said: “A man came to the Messenger of Allah

and said: ‘O Messenger of Allah! When will the Hour (i.e., the Day of Resurrection) come?’ He

replied: “What have you prepared for it?” The man said: ‘Only my love of Allah and His Messenger.’ The Messenger of Allah

then said: “You will be with those whom you love.”” [Al-Bukhari & Muslim]

It is not as important to know when the Hour will occur as it is to prepare for its arrival, and this is the reason why the Prophet

drew this to the attention of the man by asking him that question.

Anas, may Allah be pleased with him, said: “After being blessed by embracing Islam, we never rejoiced at anything as much as we did about this answer of the alayhi wa sallam to that man. I love Allah, His Messenger

and ‘Umar, may Allah be pleased with him, and hope to be with them (in the Hereafter) even if I cannot perform the good deeds they did.” [Al-Bukhari & Muslim]

The Companions, may Allah be pleased with them, had great love for the alayhi wa sallam, to the extent that they would face arrows that were being fired in his direction to shield him. They would risk their lives for him and sacrifice everything for his rescue. ‘Amr ibn Al-‘Aas, may Allah be pleased with him, said: “There was no one dearer to me or more glorified than the Prophet

A man from the Ansaar, may Allah be pleased with them, came to the Prophet

and said: “You are dearer to me than myself, my child, my family and my wealth, and I feel as if I am dieing when I do not see you.” Then he began to cry. The alayhi wa sallam asked: “Why are you crying?” The man replied: “I remembered that we will die and you will die, then you will take your place in Paradise with the other Messengers and Prophets, while we, if indeed we do enter Paradise, will be lower in rank than you, and thus we will not be able to see you in .”

Note how much they loved him; they were worried about not seeing him, despite the fact that they may also be in Paradise.

The alayhi wa sallam did not comment on his words until Allah revealed the following verses which mean: “And whoever obeys Allah and the Messenger – those will be with the ones upon whom Allah has bestowed favour of the prophets, the steadfast affirmers of truth, the martyrs and the righteous. And excellent are those as companions. That is the bounty from Allah…” [Quran 4: 69-70] Thereupon the alayhi wa sallam summoned him and said: “Glad tidings to you!” [Al-Bayhaqi]

Once, a female companion was waiting at the approach to Al-Madeenah for the return of the Muslim army from the battle of Uhud. She was informed that her husband, brother and father were killed, but her only reply was: “What happened to the Prophet?” They told her that he

was fine and unharmed, but she insisted to seeing him so that she would be sure that he

was truly safe. When she did see him, she remarked: “Any affliction, after seeing that you are safe, is minor.”