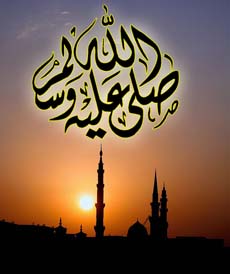 who instructed us to remember the affliction of his death whenever we are trialled by any hardship, so that we may thereby condole ourselves and ease the impact of that hardship, which would be insignificant in comparison.

Signs that prove one’s love for the Prophet

1. Mentioning him frequently and exalting his mention. Allah Says what means: {Indeed, Allah exalts the mention of the Prophet, and His angels [ask Him to do so]. O you who have believed! Ask [Allah to] exalt his mention.} [Quran 33: 56]

There are many times and occasions when this is legislated to be done, such as during supplication. Ubay ibn Ka`b

reported: “I (once) said: ‘O Messenger of Allah! I frequently invoke Allah to exalt your rank; how much of my supplication should I devote to you?' He

said: "You may devote as much as you wish.” When I suggested a quarter, he

said: "Do whatever you wish, but it would be better for you if you were to increase upon that.'' I suggested half, and he

said: "Do whatever you wish, but it would be better for you if you were to increase upon that.” I suggested two-thirds, and he

said: “Do whatever you wish, but it would be better for you if you were to increase upon that.” I (finally) said: ‘Shall I devote all of my supplication to invoke Allah to exalt your rank?’ He

said: "You would then be freed from your worries, and your sins would be forgiven.''” [Ahmad & At-Tirmithi]

2. Longing to see him: The Prophet

said: “I swear by the One in whose Hand the soul of Muhammad is! A day will come when not one of you will be able to see me (i.e., after my death) and seeing me then would be dearer to a person’s heart than his family and wealth.” [Ahmad & At-Tirmithi]

Losing ones family and wealth is a minor issue in comparison to the great bounty of being a companion, whose sins are forgiven, of the Prophet

3. Being sincere to the Prophet

said: “This was done during his lifetime by exerting all efforts to obey him, supporting him, helping him, sacrificing one’s wealth for his sake if he were to demand it, and hastening to attain his love. After his death, it is expressed by learning his Sunnah, his manners and etiquettes, glorifying his commands and adhering to them, becoming angry at those who live according to anything other than his way, and loving those who adhere to it, as well as loving those who are from his descendents, those who migrated with him and those who supported him, and indeed anyone who was in his company even for as brief a period as an hour.

Additionally, it entails imitating him in the way he dressed.” Imam Al-Qurtubi

added: “It is to believe in his prophethood, to love those who supported him, to hate those who hate him, to glorify his Sunnah and revive, defend and spread it, as well as calling people to it and imitating him in his morals and conduct.”

4. Loving those whom he

then we also love them, and Allah is our witness to this love. Likewise, we love those who follow his Sunnah and his household, and they are, as Zayd

said when clarifying the narration of the Prophet

We pray for all of them during our daily prayers; thus if somebody’s lineage is known to originate from the Prophet

and they are a pious person with sound creed, and not a Soofee, a deviant or an innovator, then they should be loved for two reasons: One being their piety and the other being their relationship to the Prophet

Loving his wives is also part of this, as Allah Says what means: {The Prophet is more worthy of the believers than themselves, and his wives are [in the position of] their mothers...} [Quran 33: 6]

is to love his wives, who are the mothers of the believers, and not to harm or slander them in any way.

accepting the guidance they conveyed to us, and emulating them.

Many are those who claim to love the Prophet

even from amongst the innovators, but the ‘proof’ of their love for him is that they worship him alongside Allah, and supplicate to him instead of Allah, and seek forgiveness from him; these people exclude and forget Allah. Is this love, or is it association with Allah, which he

hated more than anything else? He

alluded to this when he

said: “Do not praise me as the Christians praised the son of Maryam.” [Al-Bukhari]

By this statement, he

did not forbid all types of praise for him, but rather only the type that the Christians did (and do) for Jesus ,‘Eesa

which is where they raise his rank to one above that which Allah granted him, which is that of a slave and a messenger, and they worship him instead of Allah. This is similar to what the deviant Soofees and other sects did and do.

On the other hand, Ahlus-Sunnah Wal-Jama’ah prove their love for the Prophet

by obeying his commands, following his Sunnah and adhering to his guidance; this is how one follows his way, as Allah Says what means: {Say [O Muhammad]: If you should love Allah, then follow me, [so] Allah will love you and forgive you your sins…} [Quran 3: 31] This is real love!

Loving and glorifying the Sunnah – III