Loving and glorifying the Sunnah – III 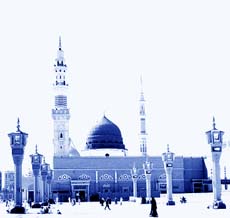 reported that the Messenger of Allah

which was reported by Anas

: "He who shuns my Sunnah is not from me.” [Al-Bukhari] These sayings made them love the Sunnah of the alayhi wa sallam and spread and propagate it amongst their successors.

fulfilled their duty and played their expected role in spreading and propagating the Sunnah of the alayhi wa sallam; they taught it to others with sincerity and advised those who shunned it to adhere to it, warning them against their actions. Huthayfah

once saw a man rushing during his prayer and failing to be tranquil in his bowings and prostrations; so he said to him: “You did not pray! Had you died in that state then you would have died upon other than the way of

.” [Al-Bukhari] He was bringing his attention to the fact that being tranquil and submissive during prayers was how the Prophet

would sit on his buttocks during the Tashahhud in his prayer, so his son began imitating him; when ‘Abdullaah, may Allah be pleased with him, saw this, he forbade him from doing so and informed him that this was not how the Prophet

performed his prayers, so his son said to him: “I saw you praying this way.” His father informed him that his legs were injured from the time of the of Khaybar, and that he could not therefore adhere to the Sunnah in this position of prayer. [Al-Bukhari]

; compare this to the way some people consider certain acts of the Sunnah to be minor, thereby undermining them.

about sitting in the position of ’ between the two prostrations (which is to sit with one’s buttocks on his heels while bending his toes and directing them towards the Qiblah). He informed them that it was the Sunnah, but they remarked: `We do not see it befitting a man to sit in such a manner.` But he repeated and emphasised to them the fact that the Prophet

would sit this way.” [Muslim]

This is one of the ways he

would sit, while the other and most common practice of his was that he would sit on his left foot and have his right foot raised while having its toes pointing towards the direction of the Qiblah.

These were some examples of how the Companions

would propagate the Sunnah of the Prophet

and they would also openly forbid those who contradicted the Sunnah, as in the story when Marwan ibn ‘Abdul-Malik delivered the Khutbah of ‘Eed  before the prayer, which is directly contrary to the Sunnah, so a man stood up whilst he was delivering the Khutbah and told him that he had opposed the way of the Prophet

by doing what he did. Marwaan paid no attention to what the man said, and so Abu Sa’eed

said: “This man (i.e., the one who spoke to Marwaan) has fulfilled his duty by informing him of the Sunnah and attempting to forbid him from continuing; I heard the Prophet

Acts of worship were not the only thing which the Companions

learned the ways of the alayhi wa sallam - he even taught them their manners. Anas

said: “Once the Prophet

came to our house and asked for something to drink, so we milked a sheep for him and I gave him the milk to drink while Abu Bakr, ‘Umar and other senior companions

said: `O Messenger of Allah! Abu Bakr is to your left` in an attempt to bring that to his attention, but he

old and young, were keen to adhere to the Sunnah of the Prophet

; it was never reported from a single one of them that they said about any part of it: “This is only a Sunnah and is not mandatory… this is only recommended and not obligatory… this is a minor issue and not a major one, and we should not waste our time in it… this is a trivial matter” quite unlike what many people say nowadays about the Sunnah, thereby giving it a low ranking in their list of importance. Instead, the Companions

would apply anything that came to them from the alayhi wa sallam, and would practice it fully and very precisely. Even in matters that were related to man’s natural disposition, such as growing the beard, using the Siwaak (a special twig that is used as a toothbrush) and so on.

Is it not time for us to apply the Sunnah in our practices and actions, our families, the way we dress, our children, our homes, our prayers and all other affairs?