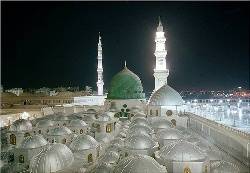 In the tenth year of the Hijrah, or 632 AD, the Prophet Muhammad

set out for Makkah to perform Hajj. This time about 100,000 believers accompanied him. This pilgrimage is commonly known as the Farewell Hajj (Al-Hajjathul Wida'a). It was during this time that he explained the rules of Hajj and gave his famous speech, known as the Final Sermon.

Upon reaching Makkah, the Prophet

and his followers put on the white sheets that showed their equality before Allah The Almighty. This is called Ihram. Then the pilgrims went directly to the Ka'bah and circumambulated it seven times in an anticlockwise direction. This is called the Tawaf. As the Muslim pilgrims arrived, they called out:(Labbayka Allahumma labbayk, labbayka laa shareeka laka labbayk. Innal hamd wan-ni’mata laka wal-mulk, laa shareeka lak) Here I am, O Allah, here I am. Here I am, You have no partner, here I am. Verily all praise and blessings are Yours, and all sovereignty, You have no partner!

This is the prayer called the Talbiyah, which is the answer to the Divine call to come and give one's life wholly to Allah.

Next, they ran back and forth seven times between the small hills of Safa and Marwah in memory of the time when Allah The Almighty tested the Prophet Ibraheem

and his family. This is called the Sa'y, and it shows the soul's determined search for that which gives true life.

to leave his wife, Hajar, and their son, Isma’eel (Ishmael

), in His care in the uninhabited valley of Makkah. In the barren desert the two soon began to die of thirst. Frantic, Hajar ran back and forth between the two hilltops known as 'Safa' and 'Marwa' trying to spot a passing caravan in the distance. But there was none. Finally, when all seemed lost, a spring gushed forth at the feet of the suffering child, Isma’eel

. This spring is now known as the well of Zam Zam. It reminds pilgrims of the truth, that when all hope has vanished, God remains to give healing, strength and life to the soul.

Now the pilgrims had completed the rites in the Sacred Mosque in Makkah. On the eighth day of the Hajj, the pilgrims went to the valley of Mina, about ten kilometers from the Ka’bah, where Allah The Almighty tested Ibraheem

by ordering him to sacrifice his son, Isma’eel. At the last moment, Allah The Almighty stopped Ibraheem

and allowed him to sacrifice a ram instead.

On the ninth day (9th of Thul-Hijjah) of the Prophet's Hajj, the pilgrims proceeded to the Plain of Arafat to stand on the Mount of Mercy. There they stood in the sweltering heat, bareheaded, thinking about Allah The Almighty and praying for His Mercy. This is called the Woqouf. Here, on that day during the sermon, an important verse of the Quran was revealed to the Prophet Muhammad

. In this verse Allah Says (what means): {…This day I have perfected for you your religion and completed My favor upon you and have approved for you Islam as religion…} [Quran 5:3]

spoke to his followers. He told the Muslims to let the Quran and his own example be their source of guidance in life. He

ordered them to stop living as they had done before Islam. The age-old practice of revenge ended. Property was to be respected. And, he

said, "Know that Muslims are brothers to one another." This was a new idea amongst the quarreling tribes. "Have I made myself very clear?" asked the Prophet

After the sermon, the Prophet

looked up and cried: "My Lord! Have I delivered aright the Message I was charged with and fulfilled my calling?" Then he

told the gathering: "You will be asked about me, so what will you say?"

They answered with one voice: "We bear witness that you have conveyed Allah's Message, performed your duty and that you have meant goodness for us." Pointing his index finger toward heaven and then to the people, he

ended his speech by saying, "Let those present convey the message to those who are absent."

By sunset, they headed back toward Mina, gathering pebbles along the way. On the next day, they performed the ritual of casting their pebbles, symbolized by three pillars set up in memory of how Ibraheem

and his family resisted the temptation of Satan. In doing this, the pilgrims pledged themselves once more to Allah Almighty and promised to do their best to drive any devils out of themselves.

Finally, animals were sacrificed, and the pilgrims returned to perform the Farewell Tawaf of the Ka'bah. The meat from the sacrifices was sent to the poor and needy.

Three months later, after the Farewell Pilgrimage the Prophet

became sick and he

couldn’t recover from it. Eventually, on 8th June 632 AD at the age of 63, the Prophet Muhammad

‘The Mercy to the World’ achieved his mission successfully and passed away.