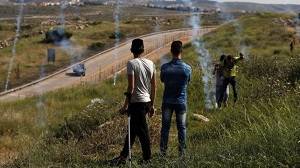 A jabbing pain in his shoulder and thigh roused Obada from his sleep at 3am. In the half-light, the 15-year-old could make out eight masked men surrounding his bed, their rifles pointed at him.

"I felt terrified," he said of the experience of being arrested in February from his home in the village of al-Araqa, near Jenin in the northern West Bank.
Obada is one of more than 100 Palestinian children who, in recent months, have found themselves dragged from bed at gunpoint in the middle of the night by Israeli soldiers, according to children's right groups.

Testimonies like Obada's feature in a new report, No Way to Treat a Child, compiled by Defence for Children International - Palestine (DCIP), a group monitoring Israeli violations of Palestinian children's rights.

The 440 children currently in military detention are the highest total since the Israeli army started issuing figures in 2008 - and more than double the number detained this time last year.
The rights group says that, despite promises two years ago from the Israeli army to phase out night raids following international condemnation, in practice, they are used as routinely as ever.

During his arrest, Obada said he was hit with a rifle butt, blindfolded and his hands tied with a plastic cord that cut into his flesh. "The soldiers dragged me out of the house without allowing me to say goodbye to my family and without telling me why and where they were taking me," he said.

The goal is to terrify the population so that they will submit and not resist the occupation.

Over the next fortnight, according to Obada, he was repeatedly beaten. Indignities included being locked overnight in a small toilet cubicle and assaulted with a taser when he protested.
For 12 days, his only break from solitary confinement was to be taken from his cell to an interrogation room where he was tied tightly to a chair, slapped and threatened.

He was repeatedly questioned about his ties to two school friends, Nihad and Fuad Waked, who had been killed a few days earlier during an attack on soldiers.

Obada's account of his arrest and detention accord with a pattern of abuse similar to other children's testimonies, said Ivan Karakashian of DCIP.

Three-quarters of children reported being physically assaulted during their detention. In nearly 90 percent of cases, parents had no idea where their child had been taken, and in 97 percent of interrogations, no parent or lawyer was allowed to be present.

Some 60 percent of children were then transferred to prisons in Israel, in violation of international law, where, typically, they waited three months for their first family visit, as relatives struggled to get entry permits to Israel. Such abuses contrast strongly with the rights guaranteed to children both in Israel and in the Jewish settlements in the occupied territories.
Karakashian told Al Jazeera that "the goal [of the detentions] is to terrify the population so that they will submit and not resist the occupation".

DCIP said it was alarmed not only by the rapid rise in the number of arrests since last October, but by the growing number of young children being locked up. More than 100 of those currently in prison are aged between 12 and 15.

This month, a military court sentenced a 13-year-old girl from Beit Fajjar, near Hebron, to four and a half months detention after she allegedly approached a military checkpoint holding a knife.

Following strenuous criticism, Israeli authorities released the youngest prisoner in an Israeli jail, 12-year-old D* al-Wawi, on Sunday, two months before her four and a half month sentence finished.

The dramatic increase in arrests has coincided with a surge of attacks and protests by Palestinians in the occupied territories since last October. Most Palestinian children in detention are convicted of throwing stones. In addition to a jail sentence, each is given a suspended sentence, usually of several years, that is activated if they are rearrested. About 90 percent also receive a fine.

Karakashian said that in recent months military courts had been increasing all three components of the children's sentences. "Many families cannot afford to pay the fine, so the children have to serve a longer sentence in lieu," he told Al Jazeera.

"And the suspended sentence is like a sword hanging over their heads. Many are afraid to leave the house or go to school for fear that they will be arrested at a checkpoint and sent back to detention."

"They can end up under a self-imposed house arrest for years after their release."

The new report is likely to embarrass Israel after it only narrowly avoided inclusion last year in a United Nations "shame list" of serious violators of children's rights. UN agencies had been especially disturbed by the 500 children killed and thousands wounded in Israel's 2014 attack on Gaza, Operation Protective Edge.

This year's report is due to be issued in the coming weeks by the office of the UN Secretary-General, Ban Ki-moon. Israel ratified the UN Convention on the Rights of the Child in 1991.

But a 2013 report by UNICEF, the UN children's agency, concluded that abuses of Palestinian minors in military detention were "widespread, systematic and institutionalized".

A year earlier, Israel was harshly criticised in a report by a British government-backed delegation of lawyers. Catherine Weibel, a spokeswoman for UNICEF in Jerusalem, told Al Jazeera the agency was in a "continuing dialogue" with the Israeli army in an effort to improve the military detention procedure for children.

Israel is the only country in the world, according to DCIP, that "systematically prosecutes between 500 and 700 children in military courts each year".

The Israeli army had been unnerved by the mounting bad publicity, said Gerard Horton, of Military Court Watch, which monitors abuses of children in detention.

An army debriefing paper, released in 2014 under a Freedom of Information request, noted that evidence of abuses to children "may inflict real harm on the legitimacy of Israel and its actions in the area".

That year the army promised to end both night raids and the blindfolding of minors, and to inform parents where their child was being held and record interrogations.

Karakashian said changes since had been little more than "cosmetic".

During the arrest process, 86 percent of children reported being blindfolded; 70 percent said they were strip-searched, in some cases many times; and 84 percent were not informed of their rights.

During interrogation, 29 percent of children said they were subjected to verbal abuse and intimidation, including threats of physical or sexual assault or arrest of family members.

Some 28 percent reported "position abuse" - usually being bound to a low chair to cause great discomfort. A similar number said they had been physically abused, usually slapped, kicked or pushed. A smaller number reported being choked, punched or having their head hit against a wall.

Promises to record interrogations were effectively voided, said Horton, because they did not apply in security cases - including stone-throwing, the charge faced by the vast majority of Palestinian children.

He said: "The reforms are all smoke and mirrors to get the Europeans and UN off the Israeli army's back."

DCIP found that 40 percent of arrests still occurred between midnight and 5am. "Even when a summons is issued for a child to report to a police station the next morning, it is usually delivered in a raid in the early hours of the morning," said Karakashian. "That is still a traumatic experience for the family."

"The aim is to frighten and intimidate Palestinian communities, especially those organising regular protests or that are located near settlements."

Horton said that in recent months, the Israeli army appeared to have abandoned the public relations battle.” I think the army realized it's a losing battle, unless they really change their approach - and they can't do that."

Horton said the aim of the terrorizing the children was to ensure quiet for the settlements. "Child detention is a settlement issue," he explains, adding that youngsters at friction points near settlements have to be regularly intimidated in order to protect 400,000 Israeli settlers living in the West Bank.