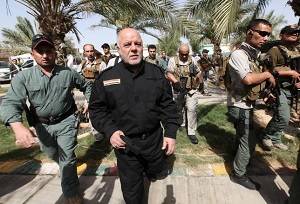 The UN human rights chief has said there are "extremely distressing, credible reports" that Iraqis fleeing the fighting in Fallujah are facing extreme abuse and even death at the hands of Shia armed groups allied with the government troops.

Zeid Ra'ad al Hussein, citing witness testimonies, said on Tuesday that allegations of abuse included reports of multiple executions of men and boys, who were trying to escape the city of Fellujah.

"Eyewitnesses have described how armed groups operating in support of the Iraqi security forces are detaining the males for 'security screening'," Zeid said.

"[This] in some cases degenerates into physical violations and other forms of abuse, apparently in order to elicit forced confessions."

Rupert Colville, spokesman for the UN High Commissioner for Human Rights, told Al Jazeera, that they have received reports that at least 21 males had been summarily executed.
"We can't confirm the reports but they seem to be credible."

The UN human rights chief said that people escaping the town had suffered "two and a half years of living hell" under ISIL rule and faced not just enormous danger in escaping but also "double jeopardy in the form of serious human rights violations".

Zeid called on Iraq's government to immediately take concrete steps to ensure that it was putting into practice its pledges to protect civilians and bring people to justice for violating human rights.

Since January 2014, at least 22,169 civilians have been killed and 43,435 wounded in Iraq, according to the Zeid's office. These figures do not include Anbar Province, where Fallujah is located.

In a separate development, a car bomb in Iraqi city of Karbala killed at least 10 civilians and wounded 26 others on Tuesday, officials said.

The bomb went off in a commercial area in the city, which is some 90km south of Baghdad.