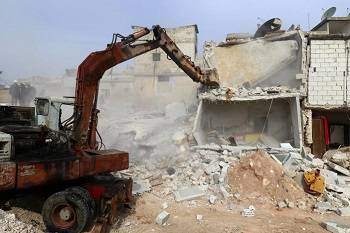 When surgeon Mounir Hakimi operated on five-month-old Maram in the Syrian province of Idlib last week, the horrific extent of her injuries quickly became clear.

"She lost both her parents in an air strike, has multiple fractures, a wound in her abdomen, and has lost lots of skin," Hakimi told Al Jazeera in a telephone interview. "We feared she might end up with an amputation because [her wounds] are so infected."

Maram was one of the 35,000 people who left Aleppo last week as Syrian regime forces retook the city's formerly opposition-held eastern districts.

As the evacuation ended on Thursday and snow blanketed the burned ground, opposition fighters and civilians were forced to the opposition-held countryside to the west, and to Idlib province on the Turkish border.

Medical staff are now overwhelmed by the influx of wounded Aleppans, who were under siege and aerial bombardment for more than 100 days. Thousands are suffering from infected shrapnel wounds, hypothermia and malnutrition. Surgeons are operating for up to 12 hours a day, and medical facilities are running at double capacity.

Maram's case is typical, according to Hakimi, who heads the charity Syria Relief, which is among a dozen aid organizations supporting the displaced from Aleppo. "She had no parents and was left in the hospital; she was taken by the ambulance and we found the names of her grandfather and her stepmother."

Doctors in Idlib are seeing dozens of "infected and gangrenous" wounds, Hakimi said, noting that some patients may need amputations, or could be left with other long-term disabilities.

"Due to the continuous air strikes [on Aleppo], there are children who have shrapnel in their spines," he explained. "That has caused them to be paralyzed. We are seeing children who have lost vision in one eye because of the shrapnel."

"The father of a three-year-old boy - who was not injured - was wondering why his son is not speaking yet," Hakimi added. "He was born in the middle of the war and can still not say a single word, because of shock from the air strikes."

Idlib's medical infrastructure was already damaged before the Aleppo evacuation. Five years of barrel bomb attacks and a year of Russian air power have maimed its hospitals, civil defense force headquarters and schools.

The province suffered 11 massacres in November, second only to Aleppo across Syria, according to analysis from the Syrian Network for Human Rights monitoring group. It defines a massacre as the killing of five or more civilians at once.

I am very tired and I feel like my mind is dead. My feelings were terrible when we left the city: We left my house, my brother's grave, and so many happy memories. But my family wants me to carry on.

"Already the medical facilities that we are sponsoring and running are under huge pressure - even before the evacuation started," Hakimi said. "Now we have to cope with a bigger population and funds are waning. The machines are not going to deal with the scale of the casualties."

Around 630 people with life-threatening injuries have been fast-tracked out of Syria. Meanwhile, some aid workers who themselves had to leave east Aleppo have vowed to continue working from their new homes.

The Syrian American Medical Society, which supported hospitals in Aleppo city, is planning to move into three new underground facilities in the opposition-held countryside and Idlib. All of its medical staff who left Aleppo city will continue working with the organization.

In his new home in Idlib, Mohamed Fadoua, a 24-year-old Syrian Civil Defense volunteer from Aleppo, intends to don his white helmet - the headgear by which the search-and-rescue team has become recognized.

"I decided to carry on my work with the civil defence force because even though we left Aleppo, that does not mean I should stop my humanitarian work, such that everyone is killed,"

Fadoua told Al Jazeera. "I am very tired and I feel like my mind is dead. My feelings were terrible when we left the city: We left my house, my brother's grave, and so many happy memories. But my family wants me to carry on."

Rady Saad, the White Helmets' Idlib liaison officer, said that the 840 volunteers in 90 teams across the province were ready to welcome new volunteers.

"Of course, the teams from Aleppo will carry on in Idlib, like people from rural Damascus," he told Al Jazeera, citing men who had arrived after previous displacements. "We have teams ready to respond 24 hours a day. This area has been bombed for more than five years and I do not think it will stop now."

Indeed, the humanitarian situation in Idlib is likely to worsen in the long term. Analysts believe that the regime will ultimately annihilate any opposition in the province, under the pretext of fighting internationally proscribed "terrorist" groups.

As Bashar al-Assad prioritizes retaking ground in southern Syria, notably the Eastern Ghouta near Damascus, civilians from such opposition-held areas are likely to be forced into Idlib, increasing its injured and traumatized population.

Kyle Orton, a research fellow with the British-based think-tank the Henry Jackson Society, told Al Jazeera that Assad forces are expected to ultimately turn Idlib into a "free-fire zone".

"Idlib is fated for a lot more mass killing," Orton said. "The pause these populations deported to Idlib get after the leave-or-die tactics of the regime to force them from their homes is only temporary."

An excavator removes rubble of damaged buildings after air strikes on the northern neighborhood of Idlib city, Syria December 5, 2016. REUTERS