The long road to rebuilding Gaza 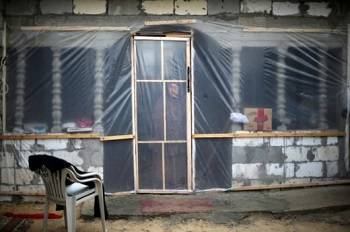 More than two years after the 2014 war, displaced citizens are still struggling to survive.

Samia Qudaih and her husband, Mohammed Baraka, have been struggling to survive with their son and five daughters in the al-Zanah area of Gaza, east of Khan Younis, for the past two years. In preparation for winter, they covered their caravan with nylon.
"We're set to receive a new hardship," Baraka told Al Jazeera. "We are facing the worst of times. We do not know if we are going to wake up safe, or just become a news headline after we die."

Hundreds of families in Gaza still live in caravans, a temporary solution to the mass displacement that followed the 2014 war. Many have no idea when they will be able to leave the caravans and rebuild their destroyed homes - a situation for which they blame Israel and Egypt, who have blockaded Gaza for the past decade, and the Ramallah-based Palestinian Authority.

According to the United Nations, the war killed more than 2,000 Palestinians, destroyed thousands of homes in Gaza and ravaged more than 70 percent of the territory's infrastructure.

The World Bank, which has been monitoring international pledges made at the Cairo conference towards the reconstruction of Gaza, says that two years after the war, less than half of Gaza's completely destroyed homes have been totally or partially reconstructed. Thousands of families have yet to receive reconstruction funds.

"Reconstruction in Gaza has stumbled," acknowledged Adnan Abu Hasna, a spokesperson for the UN Relief and Works Agency (UNRWA). "Unfortunately, the countries who pledged billions to rebuilding the Gaza Strip have not made good on their promises."

In total, international donors pledged $3.5bn towards rebuilding Gaza at the 2014 Cairo conference. As of this summer, just 46 percent of that support had been disbursed.

If donors were to fulfil all of their pledges immediately, Gaza could be rebuilt within the next year, said Abu Hasna. But pledges have been difficult to secure, with donor attention diverted by a variety of regional conflicts in Syria, Libya, Yemen and Iraq.

"Delay in reconstruction has not only affected people's lives, but it is also affecting [the economy]," he said.

UNRWA has spent $4m to temporarily house nearly 9,000 families who lost their homes in the 2014 war. "If we invested this money, we would have rebuilt 800 homes," Abu Hasna said.

"We are worried to see more money, millions of dollars, going for rent instead [of reconstruction] if the situation persists."

The Israeli siege of Gaza has been a significant factor in the delayed reconstruction, as Israel monitors and controls all building materials entering the territory, citing a need to ensure these materials are not diverted to Hamas fighters. Civilians must obtain a series of permissions in order to rebuild their homes, dragging the process out for years. In some cases, Israel has refused to approve the rebuilding of homes, UNRWA said.

Internal divisions between the Palestinian factions of Hamas and Fatah have also negatively affected reconstruction.

"Any solution for the reconstruction will depend on reconciliation between Fatah and Hamas, and when the Palestinian Authority reassumes control of Gaza," Basel Nasser, a Gaza-based official with the UN Development Programme, told Al Jazeera. "The best way to bring stability to their lives is by resolving the political situation."

The convoluted political situation has also frustrated donors, who are wary to liaise with a divided Palestinian leadership, observers say.
In the meantime, residents of Gaza remain on the precipice, staring at an uncertain future.

Hundreds of Palestinians in Gaza were rendered permanently disabled as a result of the war, and their suffering over the past two years has been unique. Many of the rebuilt structures lack facilities for disabled people, making it difficult for them to resume their daily lives, according to the Union of Palestinian Medical Relief Committees.

Mohammed Bardaa, who lost a leg, an arm and an eye to Israeli shelling years before the 2014 war, has been waiting with his family for funds to rebuild their home in the devastated Shujayea neighborhood. So far, he has received just enough money to rebuild the exterior walls. In the meantime, he has been living in cramped quarters with his parents.

"Unfortunately, the UNDP did not look into my special case," Bardaa told Al Jazeera, "and they have left me waiting a long time."

A Palestinian woman looks through her dwelling covered with plastic sheet in Khan Younis in the southern Gaza Strip, December 20, 2016. Reuters