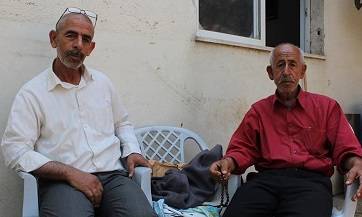 For the past four days, he had stayed at home in Kobar, after the Israeli military imposed a closure on the village in the wake of a deadly stabbing attack at a nearby Jewish settlement on July 21. The attacker, 19-year-old Omar al-Abed, who killed three Israelis and injured a fourth in the attack, came from Kobar.

Approaching the village from the southeast on a hot summer morning, Barghouti slowed his taxi to a crawl before a series of new obstacles. The Israeli military had dug down through the asphalt and rock below, and then dumped three separate metre-high piles of rubble on the road, blocking traffic from entering or leaving.

At night, young men from the village had built a dirt track for vehicles around the obstacles, enabling traffic to pass. Barghouti cautiously negotiated the three bumpy workarounds and sped into the village.

"For the first few days, it was crazy," he told Al Jazeera. "It felt like the Israeli army was raiding the village all the time; they could come at any time. They blocked the road and stopped people leaving and entering the village. I stayed at home and did not go to work."

On the eastern side of the village, Omar al-Abed's extended family lives in a row of two and three-storey homes. On a recent afternoon, in front of the final house in the row, men gathered under a blue tarpaulin, while a group of women sat together around the side.

Posters of Omar decorated the wall, even though he did not die in the attack; he remains in Israeli custody. The mood was somber, and Omar's family expressed shock at what had transpired.

"I did not raise him for 20 years to do something like that," Omar's father, Abed, told Al Jazeera. "I don't support such a thing."

Omar's uncle, Ali, added: "If I had known that my son was going to carry out an operation, I would have broken his legs to stop him."

Omar had been acting normally on the day of the attack, Abed said. In the morning, he ate breakfast with his family, and in the afternoon, he watched the local news, which showed massive protests by Palestinians near al-Aqsa Mosque compound in Jerusalem and a violent crackdown by Israeli forces. One clip showed a group of Palestinians hiding the dead body of a young man from Israeli forces, so that they could carry out a burial before the body could be confiscated.

"We were all appalled to see the body being pushed over the wall so it could be buried," Abed said. "I was discussing it, but Omar did not say anything. He was a private person. He did not share his thoughts with those around him."

Later that day, Omar told his father that he was going to attend a wedding in the village. Instead, he travelled to the settlement of Halamish, where he attacked an Israeli family in their home with a knife, killing Yosef Salomon, 70, and two of his children, Chaya, 46, and Elad, 36. The teenager was shot and wounded by a neighbor and later arrested.

Omar's sister, Mariam, said the family first knew that something had happened around 9pm, when a man arrived at the home.

"He said that Omar had posted a will to Facebook," she said. "Munir, my brother, started screaming and was really upset. He showed me what was on Facebook. I started reading and crying. Everyone was devastated."

Most of the family did not sleep that night and were still awake when the Israeli military arrived at the family home around 5:30 in the morning.

"They came in like monsters," said Abed, noting that there were eight family members in the home at the time. "They started beating everyone. There were around 40 soldiers. They searched us, they separated us, cursed us and interrogated us. They started smashing the furniture. They emptied everything in the kitchen and broke the appliances. They destroyed the house, and they arrested my son, Munir."

The following day, Israeli Prime Minister Benjamin Netanyahu said the Abed family home would be demolished "as soon as possible". The Israeli leader has claimed that home demolitions serve as a deterrent against future attacks, although international and local rights groups have denounced the practice as a form of collective punishment.

Fearing an immediate demolition, the family brought neighbors and stripped the house of everything of value, including the granite kitchen counters, the decorative window grills and even the doors. The nine people who resided in the house, including a young child and a heavily pregnant woman, have been staying with other relatives.

On July 28, the Israeli military notified the family that they had 72 hours to evacuate the house or appeal the decision to demolish the home. They said they would not appeal, saying it would be a waste of time and resources.

"We have lived here for 30 years," Abed said. "I built this house. It's all my own work. It's the only land I have for construction. When they demolish the house, they will forbid me from building here again.

"What can I do?" he added. "Fifty years ago, people lived in tents. I will have to live in a tent."
Abed's wife, Ibtissam, was arrested on suspicion of incitement related to an interview she gave to local media, in which the Israeli army says she "praised the attack"; she was later released on bail.

Israel has also conducted several military raids on the Abed family home and those of their neighbors. Around 2am on July 25, in the northwest part of the village, Abbas Barghouti was sitting outside his home with his wife as his two young children slept inside when Israeli soldiers raided a nearby house. They decided to move inside when they heard voices close to their own home, but before Abbas could do so, three Israeli soldiers appeared on his property.

"They pointed their weapons at me," he told Al Jazeera. "They were screaming at me in Hebrew. They pushed me to the ground and started beating me. They tied my hands and dragged me across the floor. One of them smashed me in the face with the butt of the rifle."
Barghouti told Al Jazeera that after a few minutes, he was allowed to enter his home, and the soldiers left after about 10 minutes, without asking him anything more than his name.

A day later, Barghouti's right eye was badly bruised and swollen shut. He received two sets of stitches at a nearby hospital. The doctors were concerned that there could be permanent damage to the vision in his right eye, but they would have to wait a few days for the swelling to go down before they could carry out an examination.

Barghouti, 35, is a high school geography teacher in a nearby village. He also owns a workshop next to his Kobar home, where he and a staff of two produce backlit plastic signs for shops. The workshop was raided by Israeli forces a couple of days after Omar carried out the deadly attack, he said.

"They confiscated the plastic-cutting machine," Barghouti added. "They accused me of being part of the production of inciting materials. But I do not print posters. I only make signs for commercial use. They smashed one computer. They confiscated all the hard drives. They took air and heat compressors and two regular paper printers."

In a statement, a spokesperson for the Israeli army told Al Jazeera that Israeli forces had seized a printing press that contained "inciting" material and that its soldiers had used force against Abbas after he resisted. "Last Monday [July 24], a printing press, used for incitement, was seized. During the operation, the owner of the printing press opposed the [Israeli army] forces and acted violently. As a result, a proportionate force was used and he was conducted to the printing press. Printing materials were found in the printing press praising terrorists and calling for attacks," the statement read.

Barghouti estimated the total cost of the confiscated and damaged equipment at around 50,000 shekels ($14,000).

"It is collective punishment, nothing more," he said. "When they beat people in front of their kids, they actually enrage people more. When they make false accusations against me and close my business, they push me, and everyone else, even more."

Two of the attacker's family members, Abed al-Abed and Ali al-Abed, sit outside their Kobar home, which has been ordered to be demolished