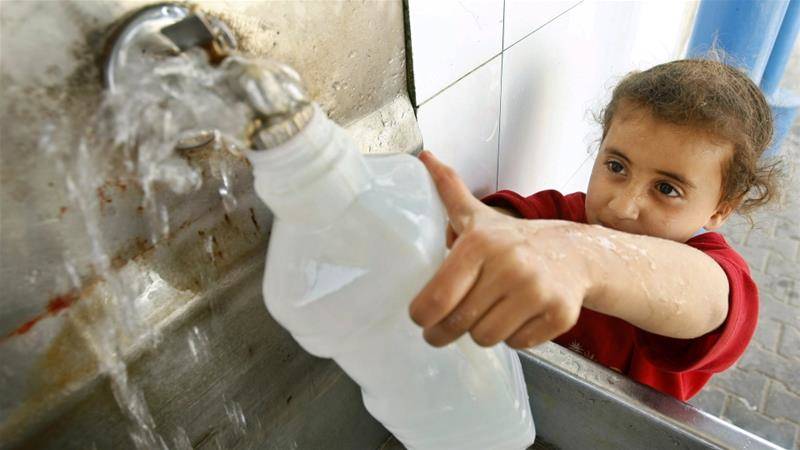 It was hailed as a breakthrough, a rare display of regional cooperation, and a positive step that may pave the way for resuscitating talks between Palestinians and Israelis, which have been on hold since 2014.

But a recent water agreement, signed under the auspices of US President Donald Trump's Middle East envoy in mid-July, may actually cement Israel's control over water resources in the West Bank, experts say.

"The mindset with many US administrations has been that it's a victory getting a Palestinian and an Israeli in a room. It sells newspapers," said Diana Buttu, a former adviser to the Palestinian negotiating team. "What doesn't sell is someone looking at this with a critical eye and saying it's a terrible idea."

The water agreement, which effectively increases the amount of water that the Palestinian Authority (PA) can buy from Israel, was inked in the context of the "Red-Dead" project, as it is commonly known - a plan to link the Red Sea, Dead Sea and a desalination plant in the Jordanian port of Aqaba through a 200km pipeline.

That $900m Red-Dead plan, sponsored by the World Bank and agreed upon in 2013, aims to boost water supplies for Israel, the Palestinians and Jordan, by diverting water from the Red Sea, turning some of it into fresh water, and pumping the excess from the desalination process into the Dead Sea, thereby replenishing its dwindling levels.

The recent bilateral water agreement would see Israel sell 32 million cubic metres of water to the PA - 22 of which would go to the West Bank for 3.3 shekels ($0.9) per cubic metre, while the rest is allocated to the Gaza Strip for 3.2 shekels per cubic metre.

"We hope that this deal will contribute to the healing of the Dead Sea and that it will help not only Palestinians and Israelis, but Jordanians as well," US envoy Jason Greenblatt said, speaking at a news conference in Jerusalem with Israeli Regional Cooperation Minister Tzachi Hanegbi and the head of the Palestinian Water Authority, Mazen Ghoneim.

The same day, the White House released a statement hailing the new agreement as "another indication that the parties are capable of working together to achieve mutually beneficial results".

Meanwhile, the PA contends that water is a final-status issue, to be negotiated in a final peace agreement between Israel and the Palestinians, and that signing this agreement would not have any effect on any future political negotiations with Israel.

Speaking to reporters in Ramallah on July 18, Ghoneim acknowledged that the deal is only a band-aid. "The crisis won't end until Israel's occupation ends and we secure our water rights in the three underground basins under Israel's control," he said.

"The water being given to us as part of the agreement is our right because we have a share in the coast of the Dead Sea. This has nothing to do with negotiations on a final [settlement] with Israel."

Under the Oslo Accords, signed between Palestinians and Israel more than two decades ago, Israel retained control of most water resources in the West Bank (80 percent), with the remaining 20 percent going to Palestinians. But the accords, which were meant to be temporary, have left Israelis consuming four times more water per person than Palestinians.

Having left out this larger issue of Palestinian rights to water resources, the plan is being downplayed by some experts as merely a basic agreement to outline how much water the PA can buy.

"It is a simple commercial deal between Israel and the PA," said Jad Isaac, the director of the Applied Research Institute - Jerusalem, which promotes sustainable development through the management of natural resources.

"This is Trump's way: saying it's a breakthrough, and trying to make a PR campaign out of it and saying that he made progress. This is the Trump approach. But actually there is nothing substantial about it."

Critics have also warned that the plan does not address Israeli restrictions on Palestinian access to water and the development of infrastructure needed to address the water crisis in the occupied West Bank.

Palestinians in the West Bank consume only 70 liters of water per capita per day, well below what the World Health Organization recommends as a minimum (100).

In the most vulnerable communities in Area C - those not connected to the water network - that number further drops to 20, according to EWASH, a coalition of Palestinian and international organizations working on water and sanitation in the Palestinian territories.

EWASH adds that "Palestinians in the West Bank extract not more than 10 percent of the shared water resources due to Israeli restrictions on the development of Palestinian water infrastructure and its exploitation of the shared Mountain Aquifer."

Palestinians maintain that their rights to the water on the banks of the River Jordan and Dead Sea shores are being violated.

When the Red-Dead deal was signed in 2013, Palestinian environmental and human rights groups said that it did not address the damage to the West Bank Eastern Aquifer, one of the only water sources for West Bank Palestinians, which is rapidly depleting because of the shrinking Dead Sea.

The Dead Sea's water levels have been falling by about one metre per year - with a devastating environmental and economic impact - mainly because most of the water of the Jordan River is being diverted, and industries mine the Dead Sea for minerals.

The recent bilateral agreement, which does not increase the Palestinians' quota of water in the Jordan River, makes an untenable situation permanent and guarantees Israel a lion's share of its water, thus reinforcing the status quo, Buttu said.

"They have moved away from the idea that water is a shared resource and instead adopted the approach that Israel controls and allocates water to Palestinians," she added. "Israel has been selling water to Palestinians for a long time, but this is enshrining it even further by saying that this is the way to alleviate the water problem."

They have moved away from the idea that water is a shared resource and instead adopted the approach that Israel controls and allocates water to Palestinians.

In 2012, Palestinian human rights organization al-Haq accused Israeli settlements and companies of "pillaging" the natural resources of the Dead Sea. "The presence of settlers who directly utilise and profit from the Dead Sea wealth has severely exacerbated this situation and contributed to the overexploitation of the area, resulting in severe environmental damage," the group said in a report at the time.

Israel counters criticism by pointing out that, under the Oslo Accords, it has full control over Area C, a vast area that represents more than 60 percent of the West Bank, and that includes the Dead Sea shore.

Authorities also say that the Israeli-Palestinian Joint Water Committee - which, until May, had not convened in seven years - will now address some of the thorny water issues.

"Recently, the Joint Water Committee was renewed, during which the two sides will discuss, together in cooperation, all the needed solutions, including water drilling and more," COGAT, the Israeli military's civil body that administers the West Bank, said in a statement.

Israeli officials say that water problems in the territories could have been addressed had the Palestinians attended the meetings of the joint committee. Palestinians attribute their refusal to conditions set by their counterparts, namely that they must support Israeli settlement water projects for any Palestinian water improvements to be approved.

According to Israeli foreign ministry spokesman Emmanuel Nahshon, "There are many things to be done together to upgrade the water infrastructure in the PA. We are talking about old, leaking pipes, and a more rational use of water." He also pointed to the illegal tapping into pipes, which he maintained Palestinians did because they did not want to pay for water. "This is something we've been wanting to do over the years, and the new water agreement is one of the ways to deal with that. The new agreement ... is not only about water quotas; it's also about more coherent and better use of water, in order to address the needs of the Palestinians."

But water specialists say that the root cause of the problem is not illegal activity, but the unavailability of water resources to Palestinians and the mismanagement and diversion of the Jordan River.

Muna Dajani, a water researcher based in Jerusalem, said that this month's agreement depoliticizes the issue of water, turning it into a commodity that is only dealt with under technical or commercial auspices. "It puts Palestinians in a corner. The PA is also so weak that it can't ask for its water rights."