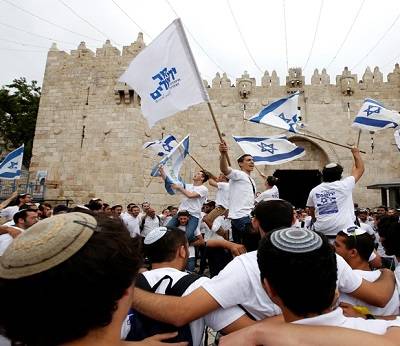 Tens of thousands of Jewish settlers, surrounded by police protection, have marched around the Old City, celebrating Jerusalem Day on the eve of the US embassy move from Tel Aviv.

The annual event, which commemorates the Israeli annexation of occupied East Jerusalem in 1967, is regarded by the city's Palestinian population as a deliberate provocation.

Past events have seen Palestinian-owned stores smashed up and Palestinian counter-protests being viciously suppressed by Israeli police.

Like in previous years, road closures and barricades were set up on Sunday to heavily restrict Palestinians from accessing the road leading to Damascus Gate, one of the entrances to the Old City.

"The Palestinian Jerusalemite today lives with a hundred sticks raining down his head," Osama Barham, an activist in the city, told Al Jazeera.

"That is to say, he is oppressed from all directions."

Barham was standing off to one side nearby Damascus Gate, where a small group of Palestinian and Arab media outlets had gathered.

Below them, a large congregation of white and blue had amassed on the stone steps. Some danced in rings in a frenetic way. Others shouted slogans in fervor.

"The US embassy move is not the most important issue here," Barham said, explaining that for Palestinian residents such a development was merely the expected outcome after decades of occupation.

"We were not shocked or surprised to hear the news when US President Donald Trump announced [in December 2017] his recognition of Jerusalem as Israel's capital," he added.

"What is much more dangerous to us than an embassy move is our reality: the onslaught of the Judaisation of the city, the Israelification of our society, the exile of Palestinian residents, the demolishment of Palestinian homes and the raiding of the al-Aqsa compound by settlers."

"Jerusalem is under occupation so we do not feel like we are suddenly in trouble because of the embassy's new location in west Jerusalem," Barham added.

The singing and chanting of the settlers' drowned the drums and trumpets of a marching band in their midst. A huge roar went up as Israeli police removed a barricade and allowed the settlers to stream into the Old City.

'The heart of the Palestinian cause'

Earlier, hundreds of settlers raided the al-Aqsa Mosque compound, the third-holiest site in Islam. They raised the Israeli flag and prayed there.

Confrontations with Palestinians ensued, resulting in at least one arrest, before the settlers left the compound.

Is the US undermining the Middle East peace process?

Inside the Old City, in the neighborhood of Sheikh Lulu, Umm Jihad stood outside her house, keeping an eye out on her children and giving directions to men finding difficulty reaching their own homes due to the Israeli-imposed closures.

"I hope that many people will be out protesting tomorrow because we need as much support as possible," she told Al Jazeera, referring to the planned demonstrations on Monday against the embassy relocation.

"Today, we cannot move around the city because the Israeli forces have practically barricaded us in our own homes."

She said the US embassy move would not change the "will of the Palestinians".

"No one will remain silent in the face of what the US and Israel are doing," she said.

"Jerusalem is the heart of the Palestinian cause, and every Palestinian who lives here feels its significance in their very bones."

The official opening of the US embassy, which will take place at 1pm local time (10:00 GMT) will be attended by an American delegation, which includes Trump's daughter Ivanka and her husband Jared Kushner, who is also an adviser to the president.

Israeli Prime Minister Benjamin Netanyahu hosted a gala reception on Sunday afternoon for the US delegation.

The reception extended an open invitation to all of the Knesset members. Foreign dignitaries were also invited, but most of the European ambassadors said they would boycott the event.

Standing on the road opposite of Damascus Gate, Afaf al-Dajani, head of an orphanage association in the Old City, cut a lone figure in the early evening light as she looked at the thinning crowds of Jewish settlers.

"Of course we will suffer with this new embassy location," she told Al Jazeera.

"We already suffer from the presence of all these settlers, and I imagine the US embassy's new site will encourage more of this."

She took in a wavering breath as Israeli police mounted on soldiers clopped by.

"I don't understand why the Arab world is silent about all of this and are watching these events as if it is a movie in a cinema," she said. "Where are their consciences?"

But for Barham, the fate of the Palestinian residents of the city was clear since the Israeli occupation more than 50 years ago.

"We never relied on outside intervention or the Arab armies to come to our rescue," he said.

"We understood that we would be alone in this battle against occupation."