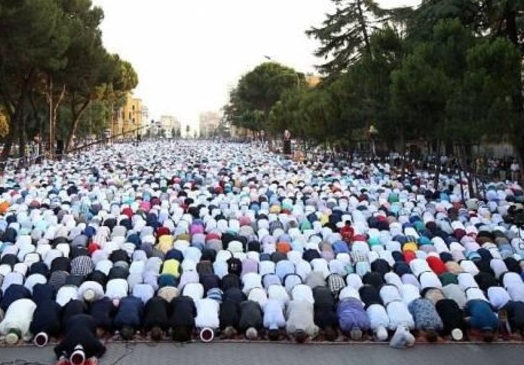 never neglected it. The Hanafi School of Jurisprudence says it is obligatory. The Prophet

is reported to have ordered men, women and children to proceed to the 'Eed prayer ground.

said."
The first Rak’ah begins with the Takbeer [saying: Allahu Akbar (Allah is the Greatest)] as the case is in all other prayers. Then Imaam (followed by the praying Muslims) recites seven Takbeeraat (plural of Takbeer). In the second Rak’ah there are five Takbeeraat other than the transmission Takbeer (i.e., the one recited when the Imam and the praying Muslims stand up to perform second Rak’ah). 'Aa’ishah, may Allah be pleased with her, said: "The Prophet

used to recite Takbeer in (the prayers of 'Eed) Al-Fitr and Al-Adh-Haa, seven Takbeeraat in the first (Raka’ah) and five in the second one other than the two Takbeeraat that precede the Rukoo’ (bowing).”
Imaam Al-Bahawi

said: “This is the opinion of most of the well-versed scholars of the Companions, may Allah be pleased with them all, and those who followed them that there are seven Takbeeraat in the first Rak’ah of the 'Eed prayer other than the first Takbeer (Takbeeratul Ihram), and five Takbeeraat in the second Rak’ah other than the transmission Takbeer and all before reciting (verses from the Glorious Quran). This was narrated from Abu Bakr, 'Umar, 'Ali, may Allah be pleased with them, and others.”
It is not affirmed that the Prophet

used to raise his hands with every Takbeer, but Ibn al-Qayyim

said: "Though Ibn 'Umar, may Allah be pleased with him, was a great follower of the Prophetic Sunnah, he used to raise his hands when reciting the Takbeeraat."
Shaykh Al-Albani

said in ‘Tamam Al-Minnah’, though it was narrated that Ibn 'Umar may Allah be pleased with him did so, (i.e., raising the hands when reciting Takbeer) it does not mean it is a Prophetic Sunnah, not to mention that the narration about 'Umar and his son may Allah be pleased with them is not authentic. As for Umar's narration, Al-Bayhaqi narrated it through a weak chain of narrators, and as for his son's narration-till now-I could not find a chain of narrations for it.”
Nothing was affirmed concerning any remembrance between the 'Eed Takbeeraat from the Prophet

but it was narrated (through a good chain of narrators) from Ibn Mas'ood, may Allah be pleased with him, that he said about the 'Eed prayer, "Between every two Takbeeraat there is praising of Allah the All-Mighty and celebrating His Attributes."
Ibn Al-Qayyem

used to keep silent between every two Takbeeraat for a little while, but nothing is affirmed that he used to recite any remembrance between them."
When the Prophet

was done with the Takbeeraat, he used to recite the Faatihah (the first chapter) of the Holy Quran) then he recites “Qaaf, By the Glorious Quran,” [chapter 50] in the first Rak’ah and Al-Qamar [chapter 54] in the second one.
Sometimes he

said: "The two cases were affirmed from the Prophet

and nothing else."
The rest of the acts of the 'Eed prayer are as those of any other prayer; nothing is different.
Whoever misses the 'Eed prayer with the congregation can offer a two Rak’ahs prayer.
Imaam Al-Bukhari

said in ‘Al-Fath’ commenting on Al-Bukhari’s point, "Regarding this point, there are two rulings:
A.   Offering the 'Eed prayer is obligatory, if missed with the congregation whether (missing it was) willingly or unwillingly.
B.   It is a two Rak’ahs prayer; 'Ataa'

said in Al-Muwatta: "Whoever - whether a man or a woman - offers the 'Eed prayer alone should recite seven Takbeeraat in the first Rak’ah and five Takbeeraat in the second one before reciting (some verses from the Glorious Quran)."
And whoever misses part of the 'Eed prayer (with the Imam) should make up for the missed part as it is, just like other prayers.
Reciting Takbeer (in the 'Eed prayer) is a Sunnah (i.e., recommended deed) which if missed intentionally or out of forgetfulness – the prayer is not null, and this issue is agreed upon by the scholars. But the one who leaves it, is undoubtedly, contradicting the Prophet’s Sunnah.
The Sermon after the Prayer
It is of the Prophetic Sunnah that the 'Eed sermon should follow the 'Eed prayer. Al-Bukhari named one of his Saheeh’s chapters by ‘The book of the sermon after the 'Eed prayer.’ Ibn 'Abbaas, may Allah be pleased with him, said: "I offered the 'Eed prayer with Allah’s Messenger

Abu Bakr, 'Umar, 'Uthman and all of them offered the 'Eed prayer before delivering the Khutbah (religious sermon)."
Ibn 'Umar, may Allah be pleased with him, said: "The Prophet

Abu Bakr, and 'Umar used to offer the prayers before delivering the khutbah.”
Waliallaah Ad-Dahalwi

said, commenting on the name of Al-Bukhari’s chapter: "It indicates that it is the Prophet’s Sunnah and the four Rightly-Guided Caliphs. But the change that happened – i.e., delivering the sermon before offering the 'Eed prayer – is an innovation in religion made by Marwan Ibn Al-Hakam.”
Imam At-Tirmithi

said: "This is the action of the well-versed Companions of the Prophet

and others that the 'Eed prayer (should be offered) before (delivering) the 'Eed sermon. And it is said that the first Imam to deliver the sermon before the prayer was Marwan Ibn Al-Hakam.

Correct Answers to Questions about Takbeer of ‘Eed Prayer - II

‘Eed: An Occasion for Worship and Showing Gratitude - I

Correct Answers to Questions about Takbeer of ‘Eed Prayer - I

'Eed prayer is a strongly recommended and important act of worship in Islam and the Prophet, sallallaahu alayhi wa sallam, never neglected it. The Hanafi School of Jurisprudence says it is obligatory....More