Modesty is a Part of Faith 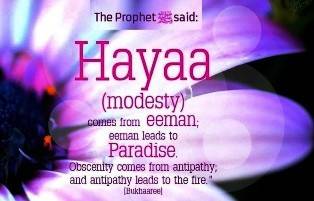 It was related on the authority of Abu Mas'ood Al-Badri, may Allah be pleased with him, that: "The Messenger of Allah

said: "One of the admonitions of the previous prophets which has been conveyed to people is that if you have no shame, you can do whatever you wish." [Al-Bukhari]

Explanation of the Hadeeth:

The saying of the Messenger

: "…If you feel no shame, you can do whatever you wish" is in the command form, and can be looked at from two angles, each conveying a distinct meaning:

(1) The first is that it is a form of threat and a challenge thrown down against those who engage in inappropriate behaviour. Such people have no shame in front of Allah and therefore, no matter what course they take, it would not make any real difference. In this case, it would be as if the Hadeeth is stating: "If you do not feel any shame from doing these prohibited acts, then do whatever you wish…" Modesty is the quality that prevents one from immodest behaviour, and the lack of it will only cause one to increase in distancing himself from Allah and make him indifferent to creed or deed.

(2) The second meaning pertains to doing that which is lawful. That is, if the action that one is about to do is not within the category of the unlawful, and we are not ashamed of doing the act in front of Allah or the people, then we are free to do it. However, if we are ashamed to do it, then we should not. The Hadeeth gives a measuring stick by which we can evaluate actions, both privately and publicly.

Thus, the first explanation relates to a lack of consciousness regarding Allah and the second is regarding the opposite, which is to be conscious of Allah and of His watching over a person and his actions.

The former explanation relates to an unbridled Nafs (base desires and lower self), whereas the latter implies observance of due constraint over it, so that it does not embark on the road to destruction.

Modesty is of two types:

Modesty is either natural or acquired. Natural modesty means that the individual has this quality by nature and does not need to exert any effort to acquire it. Acquired modesty, on the other hand, is attained by those who possess knowledge concerning Allah, being cognisant concerning His Greatness, Proximity and His Inspection of all that they do.

1. Modesty is one of the most honourable attributes and is a consistent virtue found in all the various laws sent down to each prophet and messenger.

2. It is one of the most perfect and desirable characteristics to possess and an excellent state to be in.

3. Modesty only brings good to individuals and is an indication of faith.

4. Bashfulness and shame is in direct opposition to indecency and shamelessness.

5. Modesty is an element of faith, and indecency has no relation to it.

6. Modesty adorns one's nature and personality and is indicative of his being Islamically cultured and refined.

7. Indecency, on the other hand, shows that one lacks virtues and is uncouth, dishonourable and uncultured.

8. We are obligated to guard ourselves against indecency and from acting indecently or uncultured, as qualified by Islam.

9. We must never misconstrue bashfulness or shyness with cowardice - Islamically they are far from synonymous.

10. Modesty, as mentioned, is a root virtue. One of the fruits of modesty is chastity.

11. There is no modesty when it comes to teaching the laws of Islam or searching for the truth.