Accepting the Decree of Allah 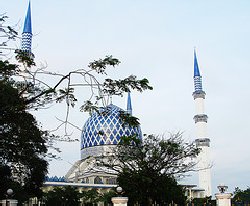 One of the most prominent distinguishing features of the Muslim woman is her deep faith in Allah and her sincere conviction that whatever happens in this universe, and whatever fate befalls human beings, only happens through the Will and Decree of Allah; whatever befalls a person could not have been avoided, and whatever does not happen to a person could not have been made to happen. A person has no choice in this life but to strive towards the right path and to do good deeds - acts of worship and other acts - by whatever means one can, putting all his trust in Allah, submitting to His will, and believing that he is always in need of Allah's help and support.

Here was an extremely difficult situation: a man left his wife and infant son in a barren land, where there were no plants, no water, and no people, and went back to the distant land of Palestine. He left nothing with her but a sack of dates and a skin filled with water. Were it not for the deep faith and trust in Allah that filled Haajar's heart, may Allah exalt her mention, she would not have been able to cope with such a difficult situation; she would have collapsed straight away, and would not have become the woman whose name is forever remembered night and day by those who perform Hajj and `Umrah in the house of Allah every time they drink the pure water of Zamzam, and run between the mounts of Safa and Marwah, as Haajar did on that most trying day.

This deep faith and awareness had an amazing effect on the lives of Muslims: it awoke their consciences and reminded them that Allah Witnesses and Knows every secret.

The Muslim woman who is obedient to the command of her Lord naturally accepts His Will and Decree, because this is one of the greatest signs of faith, obedience, piety and righteousness in a person. So the Muslim woman who is guided by the teachings of Islam always accepts whatever befalls her in life, whether it is good or bad, because this attitude of acceptance is good for her in all cases, as the Prophet

The Muslim woman is convinced that whatever befalls her in life could not have been avoided, and whatever does not befall her could not have been made to happen. Everything happens according to the will and decree of Allah so her affairs are all good. If something good happens to her, she voices her praise to Allah, The Munificent Bestower, and she becomes one of those who are grateful, obedient and successful.
On the other hand, if something bad happens to her, she faces it with patience and fortitude, so she becomes of those who are patient, redeemed and victorious.

With this solid faith, the Muslim woman faces the upheavals and calamities of life with a calm soul that accepts the Will and Decree of Allah. She seeks His Help with patience and prayer, and hopes in His Reward. She voices her praise to Allah for what He has willed and decreed, as Al-Khansaa', may Allah be pleased with her, did on the day when she heard the news about the martyrdom of her four sons and said: "Praise be to Allah Who has honored me by their martyrdom; I hope that Allah will gather me with them under His Mercy." [Al-Isaabah]

There are many other examples in the history of Muslim women who had faith, hoped in the reward from Allah and faced difficulties with patience and fortitude, and accepted the Decree of Allah.

Allah will reward them greatly; Allah Says (what means): {Those who patiently persevere will truly receive a reward without measure!} [Quran 39:10]

Curbing the Causes of Immorality in Society

Understanding the responsibility towards children

The duty of a cultured woman towards herself and her home