Our Children and Quran in Ramadan - II 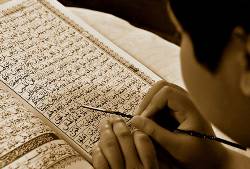 With regard to you, dear fathers and mothers, you will certainly receive a great reward and endless happiness if your child memorizes the Quran. The parents’ efforts to make their child memorize the Quran will not be in vain. Listen to the Prophet

“The Quran will come on the Day of Judgment like a pale man saying to its companion, “Do you recognize me? I am the one who made you stay up at night and made you thirsty during the day. Today every merchant is after his merchandise and today I am for you behind every merchant.” Then he will be given dominion in his right hand and eternity in his left, and a crown of dignity will be placed upon his head, and his parents will be clothed with garments which far surpass everything to be found in this world. They will say, “O Lord, how did we earn this.” It will be said to them, “Because you taught your child the Quran.” [Al-Albaani: Saheeh]

Advice of the experts:

recommended in his book “Ihyaa’ ‘Uloom Ad-Deen”, that “The child should be first taught the Noble Quran, then Hadeeths (narrations), then stories of the righteous people, and then some religious rulings.”

In his book “Tarbiyat Al-Awlaad fi Al-Islam”, Dr. ‘Abdullaah Naasih ‘Ulwaan said, "Our vigilant righteous predecessors used to send their children to educators to teach them the Quran before anything else. That is because this helps them master classic Arabic and purify their hearts and souls, in addition to deepening faith in their souls."

The beginning should be at home:

Dear caregiver, you have a great role to play in helping your child memorize the Quran as proved by experience. One of the memorizers of Quran refers to the great role of his family saying, "My parents drew my attention to the importance of memorizing the Quran, as they used to implant the love for Quran in my heart and encourage me to memorize it. They also used to refer to some relatives and young men in the neighborhood who memorized the Quran and excelled in their studies. They also told me many stories of some relatives who succeeded in their practical life due to memorizing the Quran."

Without this encouragement, the child will fail to memorize the Book of Allah The Almighty. Listen to this young man whose family did not pay attention to teaching him the Quran during his early childhood expressing his suffering, saying, "Unfortunately, no one directed me to the importance of memorizing the Quran during my early childhood; therefore, I faced great difficulty in memorizing it after graduation.

Nevertheless, I will continue by the Permission of Allah The Almighty. I have now memorized five Ajzaa’ (plural of Juz’) of the Quran, and I will keep up, Allah willing. "

Learning at an early age is like engraving in stone:

Some parents may say that their children are still young and do not understand anything. However, let me say to them that despite difficulty in memorizing at an early age, once the child memorizes something at this age, it will be engraven in his mind like engravings on a stone. It will be difficult, but it will last for a long time.

Teaching the Quran to the children since early childhood is recommended by experts in this field. Dr. Al-Ma‘saraawi, the Head of the Egyptian Council of Quran, says, "A child should start memorizing the Quran at the age of three or four to be able to finish it at the age of eight. During this period, his mind is usually free from all cares and worries, which facilitates memorization of the Quran and it stays in his mind for the rest of his life."

With regard to the difficulties that we face in the process of memorizing the Quran, a female teacher of the Quran said,

The most important difficulty is the weakness of the children’s abilities and their failure to achieve the desired progress in addition to dyslexia. Nevertheless, I know the best methods that suit each child and achieve the best results. In fact, children are very different, some of them do not memorize without beating, while others only need little instruction. It is natural to maintain a strong connection with the parents to encourage them to take care of their children and follow up their progress with them.

Sometimes, I meet parents to coordinate with them regarding what they should do.
Another female Quran teacher says,

One of the major problems is that children want to play all the time and do not realize the greatness of what they are doing. However, I try to overcome this problem through encouragement and prizes (chocolate and so on) to reward excellent children. Encouraging words also have great influence. For example, when a child memorizes well I supplicate for him saying, “May Allah bless you” or, “May Allah make you like the great Companions, or like the people of the Quran who are the close servants of Allah The Almighty.”

When the children hear these words, I feel as if light flows from their faces. I do not like beating. Instead, I punish the children who do not memorize through showing anger for a while.

At the end, here are some practical steps that will help you put your child on the right track:

• Sit with your child everyday to read a page from the Quran using the repetition method, namely, you read and ask him to repeat after you. The imitation method is the best way to teach your child the correct pronunciation of the Quran.
• Bring a tape or a CD for your child that contains the chapter that you want your child to memorize recited by a good reciter.
• Search for a teacher to teach him the Quran as of this Ramadan. This is better, because parents may get busy, while the teacher will be dedicated to this purpose.
• Follow-up is very important and you should always ask the teacher about your child’s progress. Reward your child with a present or some sweets whenever he achieves progress, but never forget a good word.
We ask Allah The Exalted to make our children from the people of the Quran and to make them the coolness of our eyes in this world and the Hereafter.

Our Children and the Quran in Ramadan - I