Our Relationship with the Universe 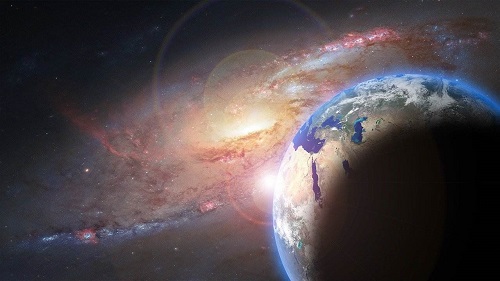 I hate the (adulterated) religiosity that blinds a person to the beauty and grandeur of the universe and impairs his understanding against grasping its secrets and harnessing them for his benefit.

As I recite the Quran, I sometimes feel that Allah, The Exalted, wants to draw our attention to His miraculous creation of human beings and the universe, and to urge us to perceive its precision, delicacy and power. He wants people to recognize the signs of His greatness in the universe that speaks of its Lord and guides to Him day and night.

Would Allah swear by insignificant elements of the universe? Let us ponder over His Saying (which means): {So I swear by the twilight glow * And [by] the night and what it envelops * And [by] the moon when it becomes full.} [Quran 84:16-18] It is an image of the reddish horizon in the late afternoon, followed by sunset and moonrise.

Let us then ponder over the image of another time of day: {And by the night as it closes in * And by the dawn when it breathes.} [Quran 81:17-18] This time marks the birth of the new day and the world coming to life with the early break of dawn.

The One who created the heavens and earth and made the darkness and light asks us to explore His Attributes in all the parts of His kingdom. He commands us to contemplate the universe as a manifestation of His beautiful Names, and to found our conduct afterward on firm faith and absolute submission to Him, and to be guided and informed by His revelation as we strive in this worldly life in preparation for our inevitable journey back to Him. Allah, The Exalted, Says (what means): {It is He who created you from clay and then decreed a term and a specified time [known] to Him.} [Quran 6:2]

It is astonishing that the majority of Muslims have lived for the few past centuries knowing very little about the universe, its sciences are secondary components of their individual and collective culture, and unveiling its secrets and powers is taken lightly by some people and considered a sort of idle talk and absurdity by others!

What are the other fields of knowledge that gripped their attention? They were caught up in the pursuit of some religious knowledge were their predecessors to know of it, they would not have conquered any land nor built a civilization! At a time when Muslims turned away from cosmic sciences, others delved deep into them and achieved remarkable advances, then harnessed that knowledge to support false beliefs and contemptible philosophies!

Islam strongly denounces such distressing separation between religion on one hand and the universe and life on the other hand and urges the righteous slaves of Allah to adopt the exact opposite attitude.

Someone might say: ‘We already know that! There is nothing new in what you are saying!’ My reply is: “The (Muslim) youth, who aspire to repent and strive in the service of Islam, still turn away from tending to the worldly life and its sciences, assign less care and attention to the exploration of the many vital forces in the universe and assume that the remembrance of Allah and expressing gratitude to Him can only be done by performing sheer worship!

I was on a Da‘wah mission to Nouakchott, the capital of the Islamic Republic of Mauritania, where I saw a group of Chinese Communists who strove for their worldly life on this earth (rather than the Hereafter) and managed to discover freshwater springs and install a water supply pipe network to the lands that needed water!

I also saw these Chinese Communists in Yemen, cutting paved roads through the heart of the desert and between mountain ranges! I said to myself: “These people came from the far east, very far away, to our land to do that; what have we done for it?!”

I was vexed to learn about a Muslim country that used to export wheat when it was a colony but after it gained independence and its people regained the reins of power, the soil deteriorated and they started importing wheat from abroad!

I felt ashamed when I listed the industrialized producing countries and could not find a single Muslim country among the top ten or even the top twenty!

It is known that Japan began its modern rise nearly a century ago, and that some Muslim peoples embarked on the same journey at the same time, but the advances achieved by Japan reached the top while we remained at the bottom!

What is the reason? Political corruption might have a big role, but I believe that cultural corruption has an even bigger role.

The losers in the arena of smart human civilization, who blabber about matters that belong to the world of the unseen but are mute with regard to matters of the seen world, are not capable of bearing nor protecting the religion of Allah.

I feel that Muslims’ failure to delve deeper into sciences in the service of their religion and worldly life requires more explanation, because the boasting of the ignorant about the fraudulent or inadequate knowledge that they have is intolerable. If we fail to unveil the whole truth to the Muslim Ummah, we would be imperiling it and ourselves to destruction and doom…

Being Bashful of Allah The Almighty

Hope – the Most Sublime Rank for the Followers

The love of Allah