Wisdom Behind Two Years of Breastfeeding - A Scientific Perspective 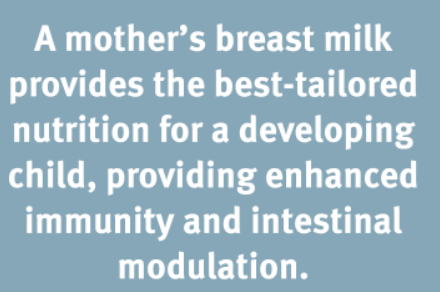 Allah the Almighty Says (what means): {Mothers may breastfeed their children two complete years for whoever wishes to complete the nursing [period]. Upon the father is the mothers' provision and their clothing according to what is acceptable. No person is charged with more than his capacity. No mother should be harmed through her child, and no father through his child. And upon the [father's] heir is [a duty] like that [of the father]. And if they both desire weaning through mutual consent from both of them and consultation, there is no blame upon either of them. And if you wish to have your children nursed by a substitute, there is no blame upon you as long as you give payment according to what is acceptable. And fear Allah and know that Allah is Seeing of what you do.} [Quran 2:233]

Opinions of the scholars of Tafseer:

Commenting on this verse, Ibn Katheer

says, "It is a guidance to mothers to breastfeed their children the complete term; two years. The rules of suckling do not apply to a child who is nursed beyond this period.

Most leading scholars are of the opinion that suckling for less than two complete years prohibits marriage. If a baby is nursed beyond the age of two, marriage is not prohibited. At-Tirmithi

assigned a chapter in his Sunan about suckling which prohibits marriage if it is done for no more than two years. Umm Salamah, may Allah be pleased with her, narrated on the authority of the Prophet, sallallahu ‘alayhi wa sallam, that he said, "Suckling does not prohibit (i.e. marriage) except when it penetrates the intestines (meaning which serves as nourishment for the child) from the breasts, and it is prior to weaning."

This is the practice according to most scholars from among the Companions of the Prophet, sallallahu ‘alayhi wa sallam, and others. Suckling does not prohibit marriage except when it is done for less than two complete years. Suckling beyond two complete years does not prohibit marriage. "From the breasts" indicates the occurrence of breastfeeding within two years, as said in another Hadeeth. It is narrated that the Prophet, sallallahu ‘alayhi wa sallam, said, "My son Ibraheem died at the period of breastfeeding, he has two wet nurses in Paradise who will suckle him the complete term." [Muslim]
In another version, "He has a wet nurse in Paradise." [Al-Bukhari]

The opinion which states the prohibition of marriage due to suckling for less than two years is narrated on the authority of ‘Ali, Ibn ‘Abbaas, Ibn Mas‘ood, Jaabir, Abu Hurayrah, Ibn ‘Umar, Ibn Salamah, may Allah be pleased with them, Sa‘eed ibn Al-Musayyib and ‘Ataa'

. It is also narrated on the authority of the majority of scholars.

said that a period of two years is qualified in the verse as complete. Maalik

as well as the followers of his opinion and a group of scholars, inferred from the above verse that suckling which prohibits marriage and takes the rulings of blood relations is what it is done when the child is less than two years of age. Once the two years has ended, there are no consequent prohibition due to further suckling. Imam Maalik

said this in his Muwatta'.

narrated on the authority of ‘Amr ibn Dinaar

back to Ibn ‘Abbaas, may Allah be pleased with him, that the Prophet, sallallahu ‘alayhi wa sallam, said, "Suckling which prohibits marriage is that which is done within two years." Ad-Daaraqutni

said that only Al-Haytham ibn Jameel

who is trustworthy and Haafith.

said, "Specifying the term of breastfeeding as two years indicates a special ruling related to suckling in Sharee‘ah. The ruling is the saying of the Prophet, sallallahu ‘alayhi wa sallam, 'Suckling prohibits what blood relations prohibit.' "

The rationale behind two years of suckling

Breastfeeding with consequent rulings in Sharee‘ah is what is done within two years. Having known that, is there medical wisdom behind it?

Nelson's textbook in Pediatrics, 1994 edition, a famous reference on children's medicine, discussed this issue. It says that modern researches discovered a strong relation between the number and period of breastfeeding and the appearance of type 1 diabetes. Some relevant studies were carried out on children from Norway, Sweden and Denmark. Researchers justified the discovery by the fact that mother's milk protects the baby against environmental elements which destroy pancreas beta cells in the children who have hereditary readiness for this disease. Also, artificial baby formula and foods include chemical elements that poison the pancreas beta cells. Cows' milk also contains proteins that may be harmful to these cells. In other countries as well, it was noticed that the period of breastfeeding is inversely proportional to the occurrence of diabetes. Researches, therefore, recommend a long period of breastfeeding so as to prevent the development of this dangerous disease and to protect children's health in the future. According to the facts, a theory evolved in recent years suggesting that cows' milk protein can bring about a preventive biological interaction that leads to the destruction of pancreas cells that produce insulin. To support this theory, it was found that there are high rates of antibodies to cows' milk proteins in the vaccine of the children who suffer from diabetes, compared to the children who do not suffer from it.

In a study, which has recently been published in Diabetes Digest in January 1998, researchers found that cow's milk protein is an independent element that causes diabetes in some children, irrespective of hereditary readiness.

In another study that was published in February 1998 in Immunity journal, the authors found that feeding on cows' milk and some other artificial baby formula as substitutes for mothers' milk leads to children contracting diabetes. This study was carried out on young children until the age of nine months. Therefore, the authors recommended long periods of natural breastfeeding.

In a similar study published in Diabetes Digest in January 1994, researchers illustrated the existence of a strong relation between ingesting products of the artificial formula, especially cows' milk, at an early age until the first year of age and the development of diabetes.

In a study that was conducted in the abdomen department in 1995 under my supervision, we found that the antibodies to cows' milk were found in the serum of children who were fed on cows' milk to the end of the second year. Children who had cows' milk after the second year were free of these antibodies. This clearly shows the rationale behind the Quranic specification of breastfeeding for two complete years.

However, the question is: Why does cows' milk cause this harm before the second year, but not after?

All the above researches suggest that the more natural breastfeeding is done for nearly two years, the less concentrated the immune bodies are which are harmful to the pancreas beta cells that produce insulin. If alternative feeding, especially cows' milk, begins early after birth, the concentration of the harmful immune bodies in the serum of the children increases.

In another accurate scientific indication, we find that the Quran specifies the period of breastfeeding as nearly two years. Allah the Almighty Says (what means): {And We have enjoined upon man [care] for his parents. His mother carried him, [increasing her] in weakness upon weakness, and his weaning is in two years.} [Quran 31:15]
Also, Allah the Almighty Says (what means): {and his gestation and weaning [period] is thirty months.} [Quran 46:15]
The two verses, thus, indicate that breastfeeding for two complete years is not obligatory. It is perfect to do so, but it is permissible to breastfeed children for less then two years as the relevant Sharee‘ah rulings state. This depends on the part of the verse (what means): {And if they both desire weaning through mutual consent from both of them and consultation, there is no blame upon either of them.} [Quran 2:233]

says, "If the child's parents agree to wean him/her before two years after discussing it, then there is no blame on them. It is understood that the individual decision is not enough, and one of them is not permitted to take the decision exclusively without consulting with the other partner, as mentioned by Ath-Thawri

and others. This indicates care for children and consideration for their welfare. It is an aspect of the mercy of Allah the Almighty toward His servants that He Set rules for the raising of children and Guided parents to the good of their children."

It is now very clear why breastfeeding is to be made for two complete years, as illustrated in the Quran. Modern scientific researches have emphasized the miraculous indication of the Quran which stated this more than one thousand four hundred years ago. Allah the Almighty Says (what means): {We will show them Our signs in the horizons and within themselves until it becomes clear to them that it is the truth. But is it not sufficient concerning your Lord that He is, over all things, a Witness?} [Quran 41:53]

Our Home: A Haven of Knowledge

When the Companions Were Children

The Future that Is Our Present

Wisdom Behind Two Years of Breastfeeding - A Scientific Perspective

Allah the Almighty Says (what means): {Mothers may breastfeed their children two complete years for whoever wishes to complete the nursing [period]. Upon the father is the mothers' provision and their...More