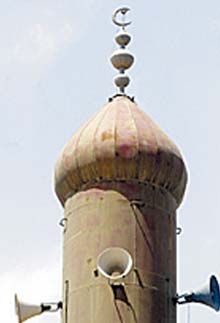 As soon as the sun rose and cast its golden rays, the market of coppersmiths in became full of activity and liveliness. Groups of people started to come to the market one after the other to purchase their goods. The workers’ hammering sounds increased as they made copper utensils. Everyone was working hard and eagerly seeking to secure their means of subsistence.

In the forenoon, a respectful and revered old man, wearing simple clothes, used to walk through the market on his way to the mosque where he would meet his students to explain grammar (of the Arabic language) and solve difficult questions and issues for them. He never felt bored with their repeated questions or of repeating his explanations over and over again. He used to do this with tolerance and patience because he loved his students and never withheld his knowledge from them.

The people of the market observed that the old man used to pass through the market regularly, at the same time every day. Then they came to know that he was a great leading scholar, in grammar and other linguistic sciences. Thereupon they would make way for him whenever he passed through the market and he would respond to that with a beautifully warm smile.

Once while the man was passing by, one of the merchants, who used to come to the market, asked a shop owner about the revered Shaykh.

The man asked him astonishingly: "Do you not know him?! He is Al-Khaleel Ibn Ahmad, the Shaykh (i.e., the leading teacher) of grammarians in and the chief scholar of language and literature."

Merchant: "I have heard a lot about him, but this is the first time I see him. One of his students told me that he is from 'Umaan and that he immigrated to with his family when he was young and studied there. Is this right?"

"This is correct. He learned in our city at the hands of two of the leading scholars of language: 'Eesaa Ibn 'Umar and Abu 'Amr Ibn Al-'Alaa'. But he exceeded both of them in knowledge, intelligence, and fame."

Merchant: "But the way he looks does not suit his position and reputation. He wears a simple garment which costs no more than a few Dirhams. A man of such fame would surely receive numerous gifts from caliphs and kings."

"My dear! He does not seek to gain in return for his knowledge or become wealthy out of it, and some people of authority and glory tried to give him some property but he refused it, out of honour."

Merchant: "But what are his means of living?"

"He has a garden from which he obtains an income that preserves his dignity and sustains him in life. This enables him to devote himself to teaching, authoring, and benefiting the students."

When Al-Khaleel Ibn Ahmad walked through the market and passed through its paths and tracks, he would not pay much attention to the noise of the market or to the hammering of the workers, who were making copper utensils, because his mind was busy with more important things. He would move quickly to begin his class in the mosque. Nothing would distract him from doing this, as he was completely devoted to worship and knowledge.

He was extremely interested in finding solutions for many of the issues of the Arabic language to which he had dedicated his life. Therefore, he invented many means that would help the reader pronounce the language correctly. In this regard, he set marks referring to the short Arabic vowels and stress in the forms that we know nowadays, such as: Fat-Hah (as in lamasa), Dhammah (as in lughz), Kasrah (as in ritm), and Shaddah (as in “kittaan”).

Moreover, Al-Khaleel Ibn Ahmad was busy preparing a dictionary in which he collected all the words pronounced by the Arabs and those which they did not pronounce. He managed to do that and produced the first Arabic dictionary in history. He arranged it on the basis of places of articulation in the sound production system. He started it with the Arabic letter 'Ayn (Ú) so it was called "The 'Ayn Dictionary."

This dictionary took many years and a lot of hard work to finish. It was the beginning of the preparation of other dictionaries that appeared at a later time, such as Al-Jawhari’s As-Sihaah, Ibn Manthoor’s Lisaanul-'Arab, and Az-Zubaydi’s Taajul-'Aroos.

Once when he was passing through the market, the workers’ hammering caught his attention. He had very sensitive ears and was very clever at mathematical sciences. So, when he heard the regular sounds of hammering – tin.. tin.. tin.. tin.. – he started to think about those tones. His mind was occupied with the rhythm of Arabic poetry and the rules according to which poets composed their poetry. He spent years trying to discover the mystery of the rules of poetic composition.

The peculiar characters became clear gradually, and step by step his mind started to uncover the secret of Arabic poetry through the rhythmic hammerings which he had heard before. Accordingly, he started to read Arabic poetry in a rhythmical sound seeking guidance with the hammerings he heard. Little by little he set the poetic meters according to which poets would compose their poems and which they call buhoor ash-shi`r (meters or measures of poetry).

During one of his lessons, he surprised the attendants with this discovery. He had, by then, discovered fifteen meters according to which poets composed their poems. He set names for these meters, including Al-Madeed, Al-Kaamil, and Al-Baseet. The terms set by Al-Khaleel Ibn Ahmad are still being used today.

Al-Khaleel Ibn Ahmad was admired by all of his contemporaries. Pious and ascetic as he was, he continued to pursue more and more knowledge until he passed away, while thinking about a scientific question that had occupied his mind. He was so busy thinking about it that he clashed with one of the columns of the mosque and fell on his back, and died. He died in the year 170 AH. He had lived for seventy years which he spent in gaining and sharing knowledge. He has always been remembered throughout the ages for his great achievements and works.