Fever: A blessing in disguise 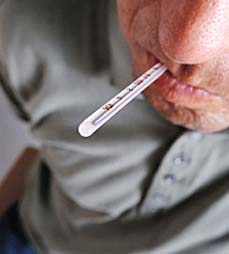 Fever wipes out one’s sins and rids his body from dead substances and germs. It is a blessing in disguise.

said: “When a believer gets sick or feverish, it is like metal when put on fire, the bad is gone and the good remains.” [Al-Bayhaqi]

also describes the intensity of fever by saying: “Fever is coal from hell, get rid of it by using cold water.” [Ibn Majah]

forbade the cursing of fever by saying: “Do not curse a fever because it abolishes sins like fire abolishes dirt from iron.” [Ibn Majah]

Fever occurs when the body temperature level rises above the normal level of 37oC (98oF). There is an area in the brain (an area that lies over the pituitary gland in the front of the head) which is a temperature regulator.

When a germ enters the body, it starts secreting toxins. Toxins affect the temperature regulator causing its temperature to rise. The substances that cause this rise in temperature are called pyrogens. Pyrogens are caused not only by germs but also by the ruined tissues in the body after being affected with germs.

when he described the believers in their kindness and affections like the body. If a part of it suffers from a germ or a virus, like inflammation in the respiratory pathways or inflammation of the urinary tracts and others, all of the body suffers from fever and restlessness.

Yes the whole body suffers. The whole body has a rise in temperature and not only where it is affected. When the inflammation worsens, the germs increase and consequently ruin the tissues. The germs and the pyrogens will find the body’s defense system ready to attack and eat the by-products of the germs and rid the body of them. While doing this, it releases to the body fluids a substance called leukocyte pyrogens or endogenous. Therefore the fever remains while the body is cleansing itself from the by-products.

say, when a man cursed the fever: “Don’t curse it because it abolishes sins like fire abolishes dirt from iron.”

It is a cleansing of our sins, a cleansing of dead substances such as dead tissue and the by-products of the germs, like fire cleans the dirt from iron.

The famous book on physiology by Guyton, 1992 edition, stated that an amount equal to one over 10 billionth of a gram of endogenous is enough for a fever to occur.

Such a small amount of a substance secreted in the body due to a very small germ or a virus is enough to transfer a person form being healthy, to becoming sick, feverish and bed ridden.

The Prophet, sallallaahu alayhe wa sallam, said: “For every ailment, there is a cure. If the cure reaches the ailment, it is cured by the will of Allah.” [Muslim]

That explains the known phenomena that aspirin does not reduce the temperature of a normal person who is not feverish. That is because he does not have these endogenous in his body to work on the hypothalamus.

How do chills occur and why?

The temperature level in the temperature regulator rises suddenly form its normal level to a higher level, due to damage in the tissues, due to the release of temperature generating substances or due to dehydration. When this happens, the body temperature rises within a few hours to attain the new temperature.

What is the cure for fever?

tells us to reduce the fever with water. The same is still applied today. Putting cold pads on a patient’s forehead is still used in a lot of hospitals and by doctors even though fever reducing medicines are abundant, like aspirin, paracetamol (or acetaminophen, which is the active ingredient in Tylenol) and others.

Using water to reduce fevers is not limited to using cold pads. Drinking a lot of fluids is also helpful. This is also understood from the wordings of the Prophetic narration: “cool it with water.” Water is either what the patient drinks, what is given intravenously or what the patient puts on his face or body to cool the fever.

We have seen a lot of patients where fever reducing medicines (antipyretics) were not effective with their rising fever. At the same time, cold water had an immediate effect. That’s why pediatricians advise parents to take a child’s clothes off and give a lot of fluids if a fever occurs. An antipyretic might also be give like paracetamol. Aspirin has been banned for children under 12 years of age.

said: “I remember once, when I was feverish, a poet cursing the fever, saying:

The sin purifier has visited and left.

How evil it is when visiting and when leaving

She asked while getting ready to leave What do you want?

I replied, to never come again.

I said, shame on him, he cursed what the Prophet

forbade to be cursed. If he had said:

The severe-sin cleanser has visited.

Greetings to it while visiting and while leaving

She asked while getting ready to leave What do you want?

I replied, to not leave.