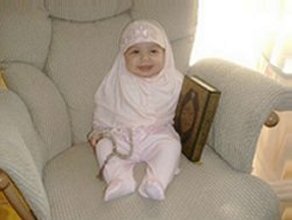 The fruit of raising daughters righteously is reward in this life before reward in the Hereafter; this is proved by the fact that Allah rewarded the righteous man who raised his two daughters virtuously, the result being Him facilitating the marriage of one of them to the honourable Prophet, Moosa

The Prophet, sallallaahu 'alayhi wa sallam, would express his love for his daughters by, for example, making statements like, “(My daughter) Faatimah is a part of me, so whoever angers her angers me.” [Al-Bukhari and Muslim]

‘Aa'ishah, may Allah be pleased with her, recounted that Faatimah

then whispered to her again, and she laughed. 'Aa'ishah

later asked her: 'What made you weep and then laugh?' She

replied: 'I will never expose a secret that the Prophet

entrusted me with.' After the death of the Prophet

asked her the same questions again, so she answered: 'First, he informed me that his death was near, so I cried. After that, he told me that I will be the leader of the ladies of Paradise, so I laughed.'" [Al-Bukhari and Muslim]

said: “I have not seen anyone closer in physical appearance and character to the Prophet

than his daughter Faatimah

… Whenever she would enter into his presence, he,

would stand up and seat her in his place, and whenever he

would enter into her presence, she would stand up, kiss him, and seat him in her place.”

This is how he

cared for his daughters. Zaynab

who was another daughter of the Prophet

sent for him due to her child being close to death, but the Prophet

sent the messenger back to her, telling him to tell her: "Whatever Allah takes away or gives, belongs to Him, and everything with Him has a limited fixed term (in this world); and she should therefore be patient and anticipate Allah's reward.'' She sent for him again, pleading with him for the sake of Allah to come. Therefore, the Messenger of Allah

. The child was lifted up to the Messenger of Allah

while breathing heavily, in the last moments before his death. Upon seeing this, the eyes of the Prophet

streamed with tears as a result of compassion that Allah had placed in his heart. Due to this, Allah caused the boy to be cured, as Imam Ibn Hajar

during prayer whilst standing, and place her on the ground before prostrating. [Al-Bukhari]

about suffering due to strenuous housework, and that it was causing her hands to roughen and develop marks; he

therefore taught her to mention Allah before going to bed by uttering, "'Subhaan-Allah' (i.e., glory be to Allah) and 'Al-Hamdulillaah' (i.e., all praise be to Allah) thirty-three times each, and thirty-four times 'Allahu Akbar'" (i.e., Allah is the Greatest); he

told her that this would be better for her than the assistance of a servant.

Also, when the family of Abu Jahl requested ‘Ali

to marry their daughter, he

later stood up and explained to the people that he was not making unlawful what Allah made lawful, nor was he forbidding polygamy, but rather, he did what he did due to Faatimah being the daughter of a messenger, which is a special case, since no one is permitted to harm the Messenger

was courageous and proud of Islam. In the incident when her father

was praying in front of the Ka’bah and the disbelievers placed the guts of a camel on his head whilst he was prostrating and then laughed and mocked him, it was she

who came, by herself, and screamed at the disbelievers and then removed the guts. [Muslim]

This is how the life of the Prophet

was regarding dealing with his daughters, so let us make it a guideline by which we live.

Some people are truly hardhearted, to the point that they do not express any emotions toward their children. It is a disaster when a daughter is raised in such an emotional vacuum, because it is easy for any evil person to then affect her with his deceptive words and entice her into his trap, and this is how the calamity of fornication occurs. This is why we need to pay close attention to the issue of daughters and grant them their due consideration, especially when we live in an era where everything evil is available and within reach.

It is indeed a great responsibility to satiate the emotions of our daughters with the love they need from the hearts of their merciful fathers, lest evil men do this instead to achieve their vile objectives.

We must also give the same level of attention to our sons in this regard, because the problems we hear regarding our young men are due to the negligence of their parents. What is our role? It is, as Allah The Almighty Says (what means): {O you who have believed! Protect yourselves and your families from a Fire whose fuel is people and stones, over which are [appointed] angels, harsh and severe; they do not disobey Allah in what He commands them but do what they are commanded.} [Quran 66:6] We must soften their hearts with a warm smile whenever we see them, and speak to them with merciful words.

If we do not pay attention to this issue, a day will come when our communities will be just like the immoral and dissolute ones.

A British survey of two thousand fathers found that: “Forty-percent (40%) of fathers feel lonely and depressed. They miss their sons, but miss their daughters a lot more.”

Some contemporary hypocrites who write in newspapers and magazines state that our daughters do not need guardians. They oppose to the Law of Allah in general, and specifically the ruling that prohibits intermixing between men and women; they demand that women leave their homes and 'prove their ability'. Why do these hypocrites wish to eradicate our honour? This mandates even more care and attention towards our daughters; we must raise them upon obedience to Allah and His messenger

and upon adherence to the Hijaab; we must not wait till they reach the age of puberty to instruct them wear it, because it might then be too late for them to accept it.

Some parents allow their daughters to wear dresses that are revealing and which leave them naked, or almost naked, and this is a far cry from correct cultivation. It is not a reflection of love or mercy to our daughters to allow them to have their own mobile phone, or to have a satellite receiver in their rooms. It is not a sign of love or mercy to allow them to go to places where immorality is spread, or to parties, or salons where they pluck their eyebrows, adorn themselves and then go out like that.

We must convince our daughters that these matters are prohibited and that they must refrain from doing them, but in order to convince them, they must experience our love and see it in our dealings with them.

Daughters in Islam - I

The Company We Choose to Keep