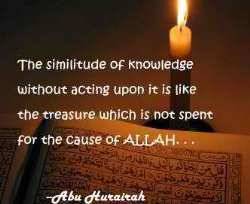 He is the honorable Companion Abu Hurayrah

. Before embracing Islam, he was called ‘Abd Shams (slave of the sun). After he embraced Islam, the Prophet

called him ‘Abdur-Rahman (slave of the Most-Merciful) and gave him the nickname of Abu Hurayrah (father of kitten).

There is a humorous reason behind this nickname. ‘Abdur-Rahman

was famous for being humane to animals and he had a kitten that he was kind to and he took care of it. It used to accompany him everywhere. Therefore, he was called Abu Hurayrah. The Messenger of Allah

used to address him using this nickname. It was narrated in a Hadeeth that the Prophet

was born in the tribe of Daws, an Arabian tribe. He reverted to Islam in the year of conquering Khaybar in 7 A.H. After embracing Islam, he used to accompany the Prophet

and sit with him for long periods of time learning from him.

tried many times to invite his mother to Islam, but she refused.

One day, he invited her to Islam, but she refused and said bad words about the Prophet

went to the Prophet

weeping and said, “O Messenger of Allah, I called my mother to Islam but she turned down my call. I called her today but she said things about you that I hated to hear. Supplicate Allah to Guide the mother of Abu Hurayrah.” The Messenger of Allah

said, “O Allah! Guide the mother of Abu Hurayrah to the right path.” I left, feeling optimistic because of the supplication of the Messenger of Allah

When I came near the door, it was closed from within. My mother heard the sound of my footsteps, and said, “O Abu Hurayrah! Wait! ” I heard the sound of water. She took a bath and put on a dress and was too hasty to put on her head cover, then opened the door and said, “O Abu Hurayrah! I testify that there is none worthy of worship but Allah and that Muhammad is His slave and Messenger.” Abu Hurayrah added, “I went back to the Messenger of Allah

shedding tears of joy. I said, ‘O Messenger of Allah! Be happy, for Allah has answered your supplication and guided the mother of Abu Hurayrah to the right path.’ The Prophet

praised Allah, and lauded Him, and said good words.

used to like fighting in the Cause of Allah. He joined the battles, attended sessions of knowledge and accompanied the Prophet

. He was the most attached Companion to the Prophet

. Compared to other Companions, Abu Hurayrah, may Allah be pleased with him, memorized the highest number of narrated Ahadeeth (plural of Hadeeth - religious practices of Prophet

. One of the Companions said about him, “Abu Hurayrah narrated a lot of Ahadeeth and the Muhajiroon (the Companions of the Prophet

in return for what would fill my stomach. So, I witness any situation if they are absent and memorize if they forget. The Prophet

said, ‘Whoever will spread his upper garment until I finish my speech and then fold it, (i.e., wrap it over his body), he will never forget anything he had heard from me.’ So, I spread the garment which I was wearing, and by Him Who sent Muhammad with the Truth (i.e., Allah), ever since, I have never forgotten whatever I heard from him (the Prophet

He also said, “Had it not been for two revealed verses in the Book of Allah, I would never have narrated anything.” Allah, The Almighty, Says (what means): {Indeed, those who conceal what We sent down of clear proofs and guidance after We made it clear for the people in the Scripture - those are cursed by Allah and cursed by those who curse. Except for those who repent and correct themselves and make evident [what they concealed]. Those - I will accept their repentance, and I am the Accepting of repentance, the Merciful} [Quran 2:159-160]

had an excellent memory and he was able to quickly memorize and did not forget. Ash-Shafi‘ee

said about him, “He is the person who memorized most of the Hadeeth in his time.” Abu Hurayrah

said about himself, “No one knows the Ahadeeth of the Prophet

more than me except Abdullah Ibn ‘Amr

for he used to write them but I did not.”

He liked knowledge and his students used to visit him until there would be no space left in his home. He was highly esteemed for his knowledge. One day, he stretched out his legs and said, “We entered the home of the Messenger of Allah

until we filled the home while he was reclining on his side. When he saw us, he bent his legs and said, ‘After me, there will be people coming to you seeking knowledge. So, welcome, greet and teach them.’” [Ibn Majah]

was extremely poor and he used to tie a stone on his stomach due to extreme hunger; he said:

By Allah! I used to lay (asleep) on the ground on my liver (abdomen) because of hunger, and (sometimes) I would bind a stone over my belly because of hunger. One day, I sat by the way where people used to walk. When Abu Bakr

passed by, I asked him about a verse in the Noble Quran and my only purpose in asking him was that he might satisfy my hunger, but he passed by and did not do so. Then ‘Umar

passed by and I asked him about a verse in the Noble Quran, and my only purpose in asking him was that he might satisfy my hunger, but he passed by without doing so. Finally, Abul-Qasim (i.e., the Prophet

) passed by and knew from my face (that I was hungry). He

left and I followed him. Then he

entered the house and I asked permission to enter and was admitted. He

found milk in a bowl and said, “From where is this milk?” They said, “It has been granted to you by such-and-such man (or by such and such family).” He

would send it to them and would not take anything from it, and whenever any gift was given to him, he

used to send some for them and take some of it for himself. This made me sad, as I hoped to have a little of this milk in order to have strength for the rest of the day. When the people came I gave them some of this milk. I was wondering what would remain of that milk for me, but anyway, I could only obey Allah and His Messenger, so I went to the people of Suffah and called them, and they came and asked for the Prophet's

permission to enter. They were admitted and took their seats in the house. The Prophet

said,“Take it and give it to them." So I took the bowl (of milk) and started giving it to each man who drank his fill and returned it to me until finally the whole group had drunk their fill.

I then placed the bowl between the hands of the Prophet

and there was still milk remaining, so he

raised his head, looked at me, smiled and said. "O Abu Hirr!" I replied, “Yes, O Messenger of Allah!” He

kept on telling me repeatedly to drink, until I said, "No. By Allah Who Sent you with the truth, I have no space for it (in my stomach).” He

Allah, the Almighty, honored Abu Hurayrah because of his faith and sincerity to Allah and His Messenger

. He married the lady whom he used to work for before he accepted Islam. In this regard, he said, “I was raised as an orphan, I migrated as a poor man and I was a hired worker for Busrah Bint Ghazwan in return for my food. I used to serve them when they camped and walked holding the reins of their riding animals if they moved. All praise is due to Allah Who made religion a means for rectifying and made Abu Hurayrah Imam.”

During the caliphate of ‘Umar Ibn Al-Khattab

was appointed as a ruler of Bahrain. He was also the vice-ruler of Al-Madeenah when Marwan Ibn Al-Hakam was the ruler. However, he used to carry firewood and sell it in the market.

He used to advise people enjoining them to do good and forbidding them from evil. Once, he was passing by the market, and he saw people preoccupied with the worldly life. So, he stood in the middle of the market and shouted, “O people, the inheritance of the Prophet

is being divided while you are here! Why do you not go and take your shares?” They asked him, “Where is that?” He answered, “In the Masjid.” The people rushed to the Masjid and then returned. He asked them, “Why have you come back?” They said, “O Abu Hurayrah! We entered the Masjid and did not see anything that is being divided.” He asked them, “What did you see?” They replied, “We saw some people praying, others reciting the Quran and others studying what is lawful and what is unlawful.” Abu Hurayrah

said, “This is the inheritance of Muhammad.”

He did not seek in the worldly life anything but the pleasure of Allah and the love of His Muslim slaves until his death. When he was dying, he cried of longing for his Lord. When he was asked about the reason for his tears, he said, “because of the little provision and the long journey.” He also said, “O Allah, I like meeting You, so, like meeting me!” He died in 59 A.H. and it was said in 57 A.H. and his age was 78 years. He was buried at Al-Baqee‘a (the graveyard in Madeenah nearby the Masjid Al-Haram) after spreading knowledge throughout the land and narrating more than 5000 Ahadeeth!

A glimpse at the life of ‘Umar Ibn Al-Khattaab – I