The buzzing of the bees and honey 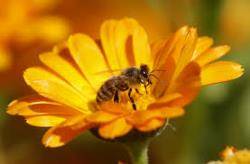 “And your Lord inspired to the bee, "Take for yourself among the mountains, houses, and among the trees and [in] that which they construct. Then eat from all the fruits and follow the ways of your Lord laid down [for you]." There emerges from their bellies a drink, varying in colors, in which there is healing for people. Indeed in that is a sign for a people who give thought.” [Quran16:68-69]

With what glory bees buzz!

. But honey's history is all the more golden-rich for Islam.

The Surah of Muhammad mentions "rivers of clarified honey" [Quran 47:15] as a prime attraction of the blessed abode of the Hereafter, reserved for the God-fearing. And the Saheehs of both Muslim and Al-Bukhari, tell us the Prophet

who prized only pure things—especially in food—so loved honey that a special supply of it enticed him to the particular company of one of his women to the jealousy of two others, for whose sake he foreswore it. (The Quran famously recounts the fallout from this in the Surah of at-Tahreem.)

Yet as the verse that opens this writing tells us, we should study the virtues of honey—both its healing properties and miraculous production. For in its sticky sweetness adheres a godly gift, indeed.

Beginning with the bees themselves, Umar Al-Ashqar, who writes on science and the Quran, in his book Belief in Allah in Light of the Quran and Sunnah, hails the hardy nature of these special bugs with a veritable catalogue raisonné of their exceptional qualities and activities. The worker bees fly forth collecting nectar from flowers and water from their surroundings, brushing pollen into containers on their posterior legs. As they buzz from place to place, they pollinate countless plants along the way. Humanity would enter a vegetation and subsequent food-chain crisis absent the incredible industriousness of bees.

Allah created the bees, moreover, with two stomachs —one for nourishment and another sack in which the nectar is stored and partially digested down into simple sugars.

Once their nectar pouch is full, the bees return to deposit its contents in their hive. There other bees fan it with their wings to condense the sugars. The honey is then scaled in hexagonal wax-comb cells. All the while, the bees carry out their specified individual tasks in buzzing harmony, contributing to the prosperity of their communities. SubhanAllah! What a sign of how singularly great and sublime He is!

A treatment for all things

More than 14 centuries ago, Almighty Allah sanctified human intuition regarding the healing power of honey. But only recently has our scientific community begun to heed. Current scholarship on bees is now proving a long tradition of honey's lay remedies for skin and cold care. In addition, traditional folks have long used apitherapy (bee sting therapy) to heel everything from arthritis to tumorous swellings. (Today, there is no more effective treatment in the world than bee venom therapy for the relief of what up till now has been chronic, excruciating post-shingles pain.) Let's take a look at the therapeutic effects of those bees that buzz by from bud to blossom.

For generations, grandmothers everywhere spread thin layers of honey on burned, ulcerated, wounded, and fungal-infected skin. Now, N.S. Al-Waili, in a 2004 study, and Lusby, two years before, tell us that honey's high sugar content, limited water, low ph, and phytochemical factors work to safely fight off dangerous bacteria and lesion infections in a shorter period of time, and without the adverse effects of pain or tissue damage, than do costly pharmaceutical company creations. The Food and Drug Administration finally approved the first honey-based wound application in 2006.

The whole medical world has been abuzz with the placebo effect of the lucrative cold medicine industry. That is, the drugs contained in the cough medicines, for children and adults, that we buy in stores or get from pharmacies for real dollars have virtually no medicinal affect on coughs at all. In 2005 in fact, researches (P.C.L. Lee and his colleagues) proved that there is a significant decrease in coughing in patients given fake vitamin treatment as opposed to no treatment at all. In other words, feeling better was pretty much in the head.

Many studies on cough medicines, writes R. Dobson in the British Medical Journal, have since found that most of their benefits come simply from increased salivation and the pleasing effects of taste. With the costly prices of cough medicines and their potential to cause harm or be abused, researchers began to look for alternatives for cold and cough relief. I.M. Paul and his associates confirmed in a 2007 study published in Archives of Pediatric Adolescent Medicine what your sitto and jiddo already knew: Honey gives at least comparable relief to over the counter cough medicines, and actually helps you in other ways. Families whose children had upper respiratory infections that caused the little ones to cough, keeping them and their parents up at night, got significantly more sleep and cough relief with buck-wheat honey than no treatment, and at least the same relief as when they gave their children a special medication. While you still should refrain from giving infants under one year old honey due to the risks of botulism (and you do not want to go overboard and promote tooth decay with too much nighttime honey) a spoonful of honey is far more frugal and just as efficacious as delving into your pockets for another bottle of cough syrup.

When we read the Quran, we often fail to understand the meaning and wisdom of Allah's revelation. But we ought to be reflecting on the signs Allah has given us in its verses that speak to our own wellbeing and recovering our health when we fall ill. Scientific research in the dominant culture of the day lags behind in recognizing that many verses of the Quran (and hadeeths of the Prophet

) point to cures, and therefore ought to be empirically investigated. Yet that does not mean that we—who bear the gift of the Quran—should deprive ourselves of following its leads to bodily balance, presence, and whole health.

In considering the buzzing honey-bees, we should not merely marvel at the incredible perfection with which they were created as they zoom by in nature doing purposeful tasks. We ought to study them— and all the proofs in nature—in order to retrieve their lessons and benefits—as well as contemplate the reasons for which Allah created us as human beings, to worship Him and thank Him alone.

Al-Hamdulillah for the boundless blessing of Islam.