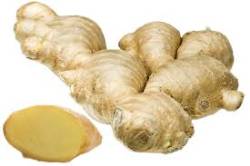 "And amongst them will be passed round vessels of silver and cups of crystal—crystal-clear, made of silver. They will determine the measure thereof (according to their wishes). And they will be given to drink there of a cup (of wine) mixed with zanjabeel (ginger), a spring there called salsabeel. And round about them will serve boys of everlasting youth. If you see them, you would think them scattered pearls. And when you look there (in Paradise), you will see a delight (that cannot be imagined), and a great dominion." [76:15-20]

Ginger is another soothing herb to contemplate. It is actually the stem of a plant that grows downward—below ground. Peeling the brown outer skin reveals a juicy food that has a distinctive taste and emanating fragrance. Curiously, ginger is mentioned in the Quran in the chapter Al-Insan (Quran 76:17) as camphor. While the two herbs are pungent and strong in characteristic, they have complimentary and contrary properties for the same soothing effect. While camphor is cooling, ginger is warming. Both come from a gushing spring, and will both be mixed to form a drink in Paradise that is served in an elegant cup as a reward for those that were righteous and patient.

According to Imam Ibn Katheer

salsabeel will run continuous with a flowing, rich current; its warmth is to make the drink balanced with the contrasting coolness of the camphor (Safiur-Rahman Al-Mubarakpuri, 2003). The servants mentioned in these verses are youthful, with an array of colors, fine clothing, and ornaments. Since there is nothing more beautiful than seeing pearls in a place that is dazzling beyond our imagination, let's take some time to ponder ginger in this life as we know it.

As the third most frequently used complementary and alternative herbal substance (Alexander, 2006), ginger has plenty of medicinal uses.

There are genetic differences in our perceptions of the spiciness and mildness of many flavors, such as ginger (Duffy, 2007). Current studies theorize that ginger acts to calm the gastrointestinal system (Golding and Gresty, 2005); however, it is noteworthy that its relieving effects are more prevalent in women than men. Approximately 250 mg ginger in teas or tablets reduces nausea and vomiting during pregnancy (Vutyavanich and Ruangsri, 2001; Lane, 2007). Other studies in complimentary medicine for cancer patients confirm that ginger is effective for the nausea and vomiting caused by chemotherapy (Mansky & Wallerstedt, 2006; Taiziang and Mechanick, 2005). Ginger is also used to combat abdominal pain (Scholl & Allen, 2007). In addition, it has the ability to lower microbial enzymes, thereby fighting against and preventing colon cancer (Manju & Nalini, 2006). More recently, ginger is being studied for use in soothing the joint pains in osteoarthritis (Fajardo & Di Cesare, 2005).

Although the jury is still out, ginger may modify or stimulate the thyroid gland (Tamler & Mechanick, 2006). By a similar thread, and since ginger may influence the amount of energy we use from the foods we consume, more studies are needed about the relationship between weight loss and ginger consumption (Riccardi et al., 2005). As a cautionary note, ginger changes the way the body thins the blood and uses anesthesia; therefore, people with diabetes, heart, or blood vessel problems or people undergoing surgery should discuss their use of ginger with their health care provider to determine if it is safe or beneficial for them (Alexander, 2006; Canwell-Bruce, 2007). This herb, mentioned in the Quran as being part of what people of Paradise drink, has been widely used by man who is still discovering numerous uses for it.

Ordinary use of ginger in our diets can be beneficial to our health, but how can we get it in our diet? Most people in the West eat sweetened ginger, such as ginger with fruit or honey, or as a zing to cakes or breads. Some prenatal healthcare professionals suggest pregnant women eat ginger cookies before getting out of bed (Davis, 2007). Ginger tea is soothing to the bowel (Merchant, 2007), and an infusion can promote relaxation. Ginger can also be used to spice up coffee and black tea. Some eat pickled ginger alone others use it to garnish foods like vegetable sushi. Alternatively, ginger pieces add flavoring to rice, lentils, seafood, or meats. If you are not sure, ask someone in your local Masjid or neighborhood—you can learn about your community while adding it to your cuisine.

Ginger is a soothing, warm herb that reminds us of the richness of Paradise. With that in mind, we need to be constantly making efforts to attain these rewards. In both Saheeh (Saheeh Al-Bukhari and Musim), we are given simple advice on how to achieve the gardens and treasures of Paradise. The Companion, Abu Hurayrah

has reported that Allah's Messenger

said: "Two are the expressions which are light on the tongue, but heavy in scale, dear to the Compassionate One. Exalted is Allah and praise is due to Him, Exalted is Allah, the Great." (Khan, 1997; Siddique, 2000). As we use and remember ginger in this world, let's seek Allah's pleasure in the Hereafter.