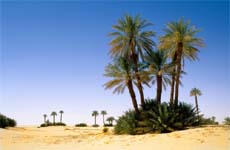 In the sixth year after the Hijrah, the Prophet

decided to expand the scope of his mission. He sent eight letters to rulers in the and surrounding areas inviting them to Islam. One of these rulers was Thumamah Ibn Uthal.

Thumamah was one of the most powerful Arab rulers in pre-Islamic times. This is not surprising since he was a chieftain of the Banu Haneefah and one of the rulers of Al-Yamamah, whose word no one dared to challenge or disobey.

When Thumamah received the letter of the Prophet

he was consumed by anger and rejected it. He refused to listen to the invitation of truth and goodness. Moreover, he felt a strong desire to seek out the Prophet

kill him, and bury his mission with him.

until eventually forgetfulness caused him to lose interest. However, one of his uncles reminded him of his plan, praising what he intended to do.

In the pursuit of his evil plot against the Prophet

Thumamah met and killed a group of the Prophet's

thereupon declared him a wanted man who could lawfully be killed on sight.

Not long afterwards, Thumamah decided to perform `Umrah. He wanted to perform Tawaf around the Ka'bah and sacrifice to the idols there. So he left Al-Yamamah for Makkah. As he was passing near Al-Madeenah, an incident took place, which he had not anticipated.

Groups of Muslims were patrolling the districts of Al-Madeenah and outlying areas on the lookout for any strangers or anyone intent on causing trouble. One of these groups came upon Thumamah and apprehended him, but they did not know who he was. They took him to Al-Madeenah and tied him to one of the columns in the mosque. They waited for the Prophet

himself to question him and decide what should be done.

was about to enter the mosque, he

saw Thumamah and asked his Companions: "Do you know whom you have taken?"

"No, Messenger of Allah," they replied.

"This is Thumamah Ibn Uthal Al-Hanafi," he

said. "You have done well in capturing him."

then returned home to his

family and said: "Get what food you can and send it to Thumamah Ibn Uthal." He

then ordered his she-camel to be milked for him. All this was done before he met Thumamah or spoke to him.

then approached Thumamah hoping to encourage him to become a Muslim. "What do you have to say for yourself?" he

"If you want to kill in reprisal," Thumamah replied, "you can have someone of noble blood to kill. If, out of your bounty, you want to forgive, I shall be grateful. If you want money in compensation, I shall give you whatever amount you ask."

then left him for two days, but still personally sent him food and drink and milk from his she-camel. The Prophet

went back to him and asked: "What do you have to say for yourself?" Thumamah repeated what he had said the day before. The Prophet

then left and came back to him the following day. "What do you have to say for yourself?" he asked again and Thumamah repeated what he had said once more. Then the Prophet

turned to his Companions and said: "Set him free."

Thumamah left the mosque of the Prophet

Companions). He watered his camel and washed himself well. Then he turned back and made his way to the Prophet's

He then went to the Prophet

by Allah, there was never on this earth a face more detestable than yours. Now, yours is the dearest face of all to "

"I have killed some of your men," he continued, "I am at your mercy. What will you do to me?"

"There is now no blame on you, Thumamah," replied the Prophet

. "Becoming a Muslim obliterates past actions and marks a new beginning."

was greatly relieved. His face showed his surprise and joy and he vowed: "By Allah, I shall place my whole self, my sword, and whoever is with me at your service and at the service of your religion."

"O Messenger of Allah," he

went on, "when your horsemen captured me I was on my way to perform ‘Umrah. What do you think I should do now?"

"Go ahead and perform your ‘Umrah," replied the Prophet

"but perform it according to the laws of Allah and His Messenger." The Prophet

then taught him how to perform ‘Umrah according to the Islamic way.

left to fulfill his intention. When he reached the he began shouting in a loud, resonant voice: "Labbayk Allahumma labbayk. Labbayka la shareeka laka labbayk. Innal hamda wa-n ni'mata laka wa-l mulk La shareeka lak.”
(Here I am at Your command O Lord, Here I am. Here I am. No partners have You. Here I am. Praise, bounty and Dominion belong to You. No partner have You.)"

was thus the first Muslim on the face of the earth to enter Makkah reciting the Talbiyyah (the oft-repeated words of pilgrims performing Hajj or `Umrah). The Quraysh heard the sound of the Talbiyyah and felt both anger and alarm. With drawn swords, they set out towards the voice to punish the one who had thus assaulted their preserve. As they came closer to him, Thumamah

raised his voice even higher while reciting the Talbiyyah and looked upon them with pride and defiance.

with an arrow when the others grabbed his hand and shouted: "Woe to you! Do you know who this is? He is Thumamah Ibn Uthal, ruler of Al-Yamamah. By Allah, if you should harm him, his people would cut our supplies, with dire consequences for us."

Swords were replaced in their scabbards as the Quraysh went up to Thumamah and said: "What is wrong with you, Thumamah? Have you given in and abandoned your religion and the religion of your forefathers?"

then went on: "I swear to you by the Lord of this House (the Ka’bah) that after my return to Al-Yamamah, no grain of wheat or any of its produce shall reach you until you follow Muhammad

Under the watchful eyes of the Quraysh, Thumamah

performed ‘Umrah as the Prophet

had instructed him. He dedicated his sacrifice to Allah alone.

returned to his land and ordered his people to withhold supplies from the Quraysh. The boycott gradually began to have effect and became more and more stringent. Prices began to rise, and the Quraysh experienced hunger and even the fear of death.

Thereupon, they wrote to the Prophet

saying: "Our agreement with you (the treaty of Hudaybiyyah) is that you should maintain the bonds of kinship but you have gone against that. You have cut the bonds of kinship. You have killed and caused death through hunger. Thumamah Ibn Uthal has cut our supplies and inflicted harm on us. Perhaps you would see fit to instruct him to resume sending us what we need."

to lift the boycott and resume sending supplies to the Quraysh, which he obeyed.

spent the rest of his life in the service of Islam, abiding by the undertaking he had given to the Prophet

died, some Arab tribes, who had not genuinely reverted to Islam, began leaving the religion of Allah. Musaylamah, the imposter, began calling the Banu Haneefah to believe in him as a prophet.

confronted him and said to his people: "O Banu Haneefah, beware of this grievous matter. There is no light or guidance in it. By Allah, it will only bring distress and suffering to whomever joins this movement and misfortune even to those who do not join. O Banu Haneefah, there shall be no prophet after Muhammad

then read out to them the following verses of the Quran (which means): "Ha Meem. The revelation of the Book is from Allah, the Exalted in Might, the Knowing, The Forgiver of sin, Acceptor of repentance, Severe in punishment, Owner of abundance. There is no deity except Him; to Him is the destination." [Quran 40: 1-3]

"Can you compare these words of Allah with the utterings of Musaylamah?" he

then gathered together all those who had remained in Islam and began to wage a Jihad against the apostates and making the words of Allah supreme. The loyal Muslims of Banu Haneefah needed additional help to stand against the armies of Musaylamah. The forces dispatched by Abu Bakr

completed this arduous task at the cost of many Muslim lives.